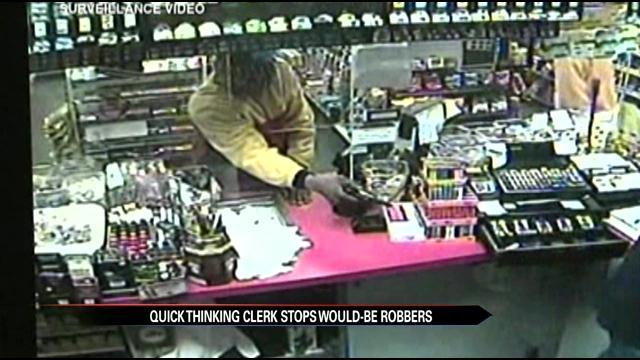 An Illinois gas station clerk out-smarted two would-be robbers and it was all caught on camera.

In surveillance video, you can see two men walk into the store and walk by one customer.

They then pull a plastic bag through the open window at the counter and point a gun at the clerk.

They demand money, but the employee thinks it's a joke.

When he doesn't react quickly enough, the man holding the gun shoots.

That's when the clerk jumps out of the way, locks the two in the store and manages to escape with his co-worker to the back office for help.

"I got kind of nervous. I don't know what I have to do," said Byju Matthew Raju, a gas station employee. "Then I look and saw the bullet, it was real and then I got scared."

The suspects escaped without any money.

Police say they have not made any arrests in the case.