Sunday is a cool but pleasant end to the weekend. This morning temperatures are in the low 30s again, so be sure to wear plenty of layers if you’re heading out early. This afternoon warms to a high around 50 degrees. Skies start mostly sunny early today, but the number of clouds increases throughout the afternoon ahead of the next system.

Overnight we’ll see rain showers, eventually turning to wintry mix, then snow showers, as temperatures fall to a low around 32 degrees. For your Monday morning commute, roads will likely be wet, but there might not be much of a snow accumulation just yet.

There are two snow impacts over the course of Monday and Tuesday, which happen simultaneously. The system moving through will primarily impact our eastern counties (LaGrange, southeastern Kosciusko, and eastern Fulton) and could bring 1-2+ inches of snow. In our western counties (LaPorte, Starke, Pulaski), lake effect snow will be your impact. The highest amounts look like they will end up in Lake or Porter County, with our Michiana counties not far behind. Snow totals for these western counties look to be about 2-3+ inches right now. Everyone else in central Michiana will likely see 1-2” between Monday afternoon and Tuesday morning, although a few areas could see even less snow on the ground. 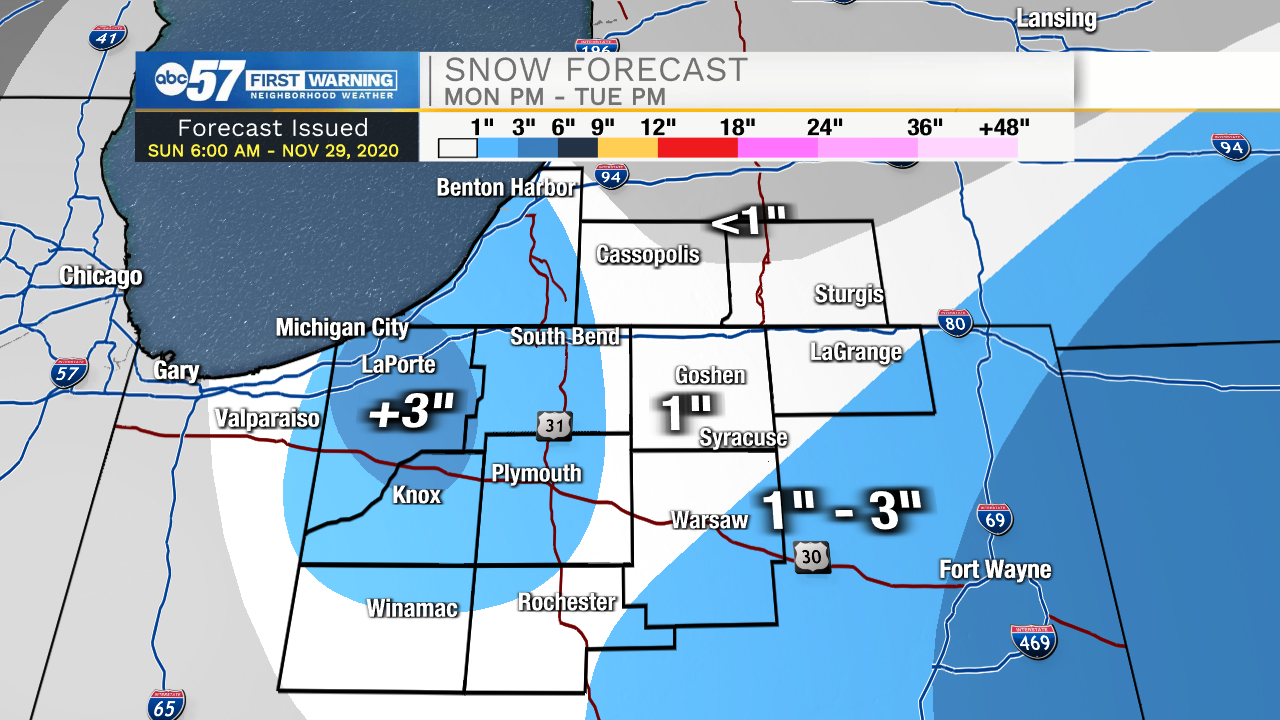 With the lake effect system, it is going to be very windy across Michiana, but especially closer to Lake Michigan. Wind gusts 40+ mph are possible starting Monday morning. This could blow snow around, and could reduce visibility when driving, starting with the Monday morning commute.

Your Monday evening commute will probably be slippery with snow on the ground, so take it slow as you’re driving home. As temperatures cool down overnight into early Tuesday morning, it’s likely that it could be another slippery drive. We’ll see snowflakes subside throughout the day Tuesday.

The rest of the work week looks dry until Friday evening. Temperatures will be cooler this week, with daytimes highs in the mid 30s to low 40s, and overnight lows in the upper 20s.