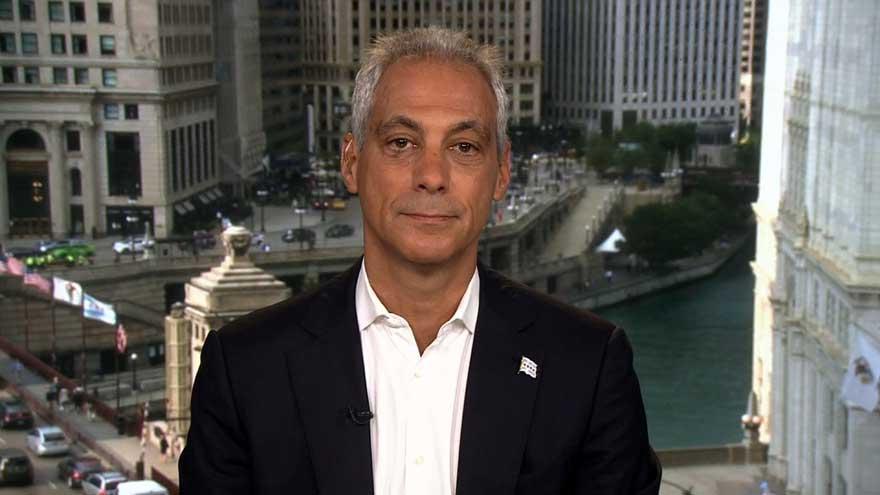 "They use cities as a way of describing violence, as a characterization which they never use around the violence associated with opiates and the drugs that are in suburban and rural communities," Emanuel, a Democrat, told David Axelrod on the "The Axe Files," a podcast from the University of Chicago Institute of Politics and CNN. "They're using the immigrant community, particularly, as a way to create something that's not of us that we have to be frightened for."

"I'm guessing, but I think there's a racial component to it," Emanuel also said of Trump's propensity to associate metropolises like Chicago with high rates of violent crime and towering death tolls. Emanuel, however, has been criticized for his city's violent crime. In 2016, there were 762 murders in Chicago, the city's deadliest year in nearly two decades.

The city of Chicago has filed suit against the Department of Justice over specific "immigration compliance requirements" in exchange for federal grant money. Emanuel expressed confidence that Chicago's standards as a "welcoming city" would win out.

Beyond the Department of Justice, Emanuel, who served as former President Barack Obama's first chief of staff, said he sees a White House on the brink of collapse.

"You have a president that cannot function within order, within a system; who cannot be disciplined to message, to ideas, to policy goals," he said. "I think it's hard to describe this as a modern White House."

"It's going to crash. You're watching a slow motion crash," Emanuel said, adding that such a failure could manifest itself in Republicans' failure to pass legislation on "a core issue like taxes."

When asked about Charlottesville, Virginia, Emanuel said Trump's comments on the violence there were the mark of a failed president.

Emanuel said he was left almost speechless by the President's remarks, in which Trump redoubled on his blame of "both sides" for the violence that lead to the death of a counterprotester. Trump also urged the media not to make broad characterizations about those who attended an extreme right demonstration, in which marchers held torches, carried flags with swastikas and chanted racist and anti-Semitic slogans.

"This is in the line of things that I never thought the president of the United States would ever, ever cross" he told Axelrod. "It's frightening to me, they [white supremacists, neo-Nazis, and KKK members] think they have a friend in the White House."

"He has turned his back and turned to trying to turn the clock back on America to a point it had walked away from," Emanuel said.