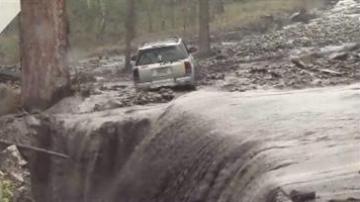 LAS VEGAS — It was a dangerous weekend in the mountains of Las Vegas as storms soaked the region for the second weekend in a row.

Heavy rains soon became a wall of water mixed with mud and debris that came cascading down the mountain side.

And many people were caught off guard.

Flood waters moved quickly and trapped one driver as water rushed over side roads.

The SUV was eventually pinned up on rocks near a large tree with the driver trapped inside with a baby and another woman.

"He pulled out real quick and kept telling me to come this way, but the water had already got us," said May Krampetz. "We were just worried that we needed to get the baby out."

The waters also stranded some people in area camp sites for a short period of time.