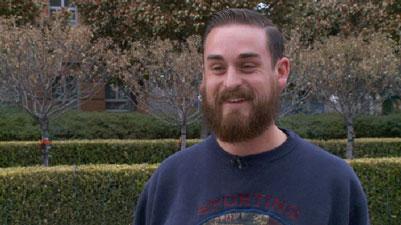 Ogden, UT -- Matt Tribe says when he bought one of Olive Garden's limited edition, never ending pasta passes, it was to fulfill his love of pasta. He soon saw another benefit.

"Every day I'd go get pasta, and I'd just go show up and someone's house and brighten their life with some Olive Garden," Tribe said.

The national restaurant chain offers 1,000 cards a year as part of their Never Ending Pasta Bowl promotion. The card gives the bearer an unlimited supply of meals for seven weeks. Tribe says he came up with "Random acts of Pasta" as a way to pay it forward.

"I realize it might be stupid to think, 'I just gave them pasta, how does that make their day better?' But somebody did something nice for them," says Tribe.

The goal was 100 meals, by the end of the seven weeks, 125 people had benefited from the unlimited pasta. It started with friends and family, but quickly turned into something more.

"I thought, what have I done to deserve this," said Tribe's friend and pasta recipient Ben Taylor. "He explained to me what he was doing, he was just giving out random acts of pasta to neighbors, friends, and even homeless people, and I thought, that's kind of a cool story."

With Taylor's help, tribe documented the journey online and through a YouTube video that shows him delivering meals to the homeless. He says he hopes to spread the message of kindness.

Tribe recognizes sharing the meals was not the point of the pasta campaign. He even checked with Olive Garden about using the card for take out, and was given the green light. He has no regrets and says it's changed the way he looks at the world.

Read more about Tribe's experience on his website, here: http://www.randomactsofpasta.com/