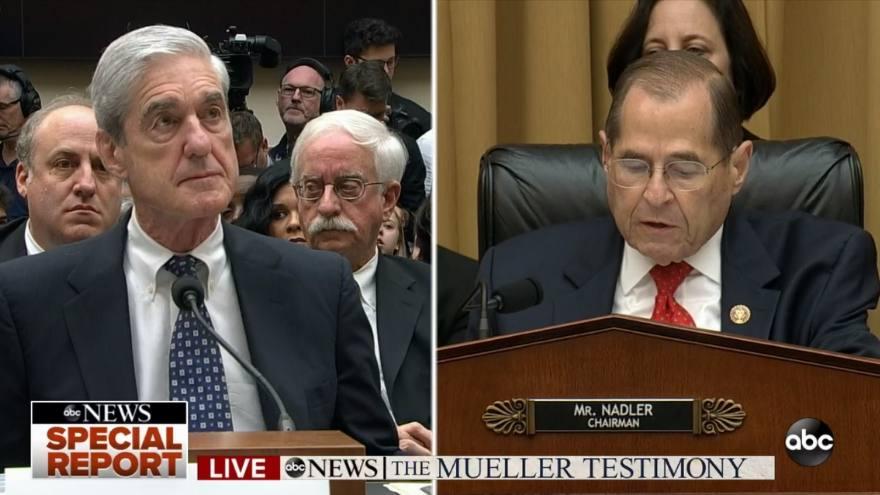 “Director Mueller, thank you for being here.  I want to say just a few words about our themes today:  responsibility, integrity, and accountability.

Your career, for example, is a model of responsibility.

You are a decorated Marine officer.  You were awarded a Purple Heart and the Bronze Star for valor in Vietnam.  You served in senior roles at the Department of Justice and, in the immediate aftermath of 9/11, you served as Director of the FBI.

Two years ago, you returned to public service to lead the investigation into Russian interference in the 2016 election.

You conducted that investigation with remarkable integrity.

For 22 months, you never commented in public about your work—even when you were subjected to repeated and grossly unfair personal attacks.  Instead, your indictments spoke for you, and in astonishing detail.

Over the course of your investigation, you obtained criminal indictments against 37 people and entities.

You secured the convictions of President Trump’s campaign chairman, his deputy campaign manager, his national security advisor, and his personal lawyer, among others.

In the Paul Manafort case alone, you recovered as much as $42 million—so that the cost of your investigation to the taxpayers approaches zero.

And, in your report, you offer the country accountability as well.

In Volume I, you find that the Russian government attacked our 2016 elections "in a sweeping and systematic fashion," and that the attacks were designed to benefit the Trump campaign.

Volume II walks us through ten separate incidents of possible obstruction of justice where, in your words, President Trump attempted to exert undue influence over your investigation.

The President’s behavior included, and I quote from your report, "public attacks on the investigation, non-public efforts to control it, and efforts in both public and private to encourage witnesses not to cooperate."

Among the most shocking of these incidents, President Trump ordered his White House Counsel to have you fired and then to lie and deny that it ever happened; he ordered his former campaign manager to convince the recused Attorney General to step in and limit your work; and he attempted to prevent witnesses from cooperating with your investigation.

Although Department policy barred you from indicting the President for this conduct, you made clear that he is not exonerated.  Any other person who acted this way would have been charged with a crime.  And in this nation, not even the President is above the law.

Which brings me to this Committee’s work.  Responsibility, integrity, and accountability:  these are the marks by which we who serve on this Committee will be measured as well.

Director Mueller, we have a responsibility to address the evidence you have uncovered.  You recognized as much when you said “the Constitution requires a process other than the criminal justice system to formally accuse a sitting president of wrongdoing.”

That process begins with the work of this Committee.

We will follow your example, Director Mueller.  We will act with integrity.  We will follow the facts where they lead.  We will consider all appropriate remedies.  We will make our recommendation to the House when our work concludes.

We will do this work because there must be accountability for the conduct described in your report, especially as it relates to the President.

Thank you again, Director Mueller.  We look forward to your testimony."

Click here to watch the live coverage of Mueller's testimony starting at 8:30 a.m. EST on July 24.