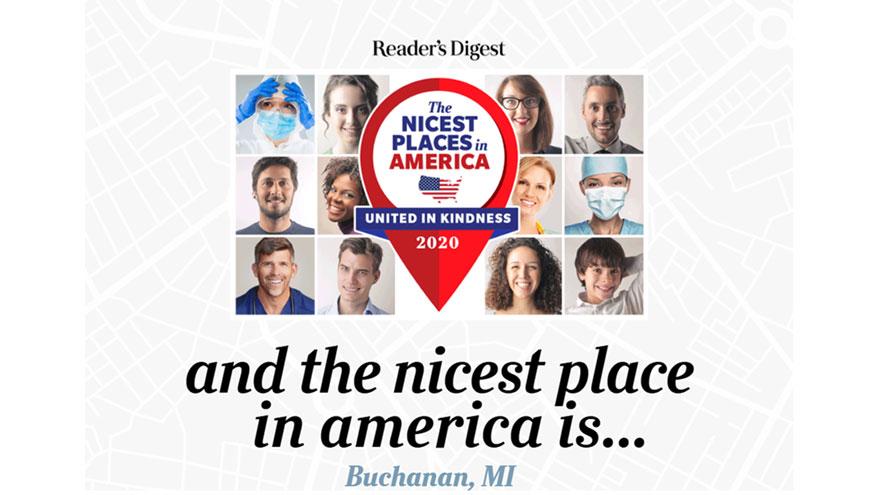 Reader’s Digest just named Buchanan, Michigan as the nicest place in the United States as part of its Nicest Places in America contest.

Buchanan is featured in the November issue of the magazine or you can read it online now.

More than 1100 people submitted stories of their community and how they came together to make each other’s lives better, according to a press release.

Buchanan topped the list because it, “is a shining example of American unity in the face of our toughest challenges at a time of national political division.”

Amidst an incredibly divisive election cycle with racial injustice and a global pandemic as its backdrop,  Buchanan's residents opted for unity and banded together to support all members of their community. When the COVID-19 pandemic meant cancelling Buchanan's 150th annual Memorial Day parade, people in town were crushed, but they would not let the virus defeat them. In lieu of the parade, citizens hung banners of 103 local veterans on lamp posts throughout town, giving people a way to pay their respects to these heroes. Soon after, when the news of George Floyd's killing broke, the people of Buchanan -- Black, white, young, old, families and children, leadership and police -- marched together under the American flag and banners of local veterans, to say that in America there should be equal justice for all.

"Buchanan is a midwestern town that loves its country, loves its history, loves its military and also loves and understands racial injustice and the need for racial justice," said internationally best-selling author and journalist Mitch Albom, a member of the Nicest Places in America 2020: United in Kindness advisory council, who is also a Michigan native. "They [the people of Buchanan] personify the ability to love your country and also love all different members of the country."

The magazine listed the “nicest” town or city in each state. In Indiana, Central Indiana topped the state.