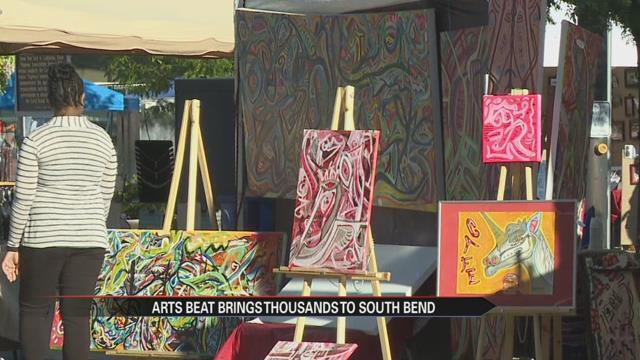 With rain in the forecast Saturday, the 14th annual Art Beat was rescheduled last minute. It was held Sunday by Downtown South Bend on Michigan Street.

“This was a huge deal to move this to another day. Logistically, it was hard to get the word out but a lot of this art is very fragile with paper arts and paintings and the artists don’t want their stuff ruined,” said Carter, DTSB Events Coordinator Kylie Carter.

With over 300 unique local artists displaying their work, an estimated 12,000 people attended the event. The previous record was around 10,000.

Elkhart artist Jean Carter has been showing her work at the festival for a few years.

In August of 2015 she was going through chemotherapy to treat breast cancer. Now a cancer survivor, Carter said she was thrilled to show her work again, especially because art has been a big part of her healing process.

“Breast cancer took me on a journey that I never expected I would go on and art was my release during that time. That was my expression as to ‘ok, I’m going to heal. I’m going to get through this,’” said Jean Carter.

For more information about Art Beat 2016 and getting in touch with the artists involved, click here.