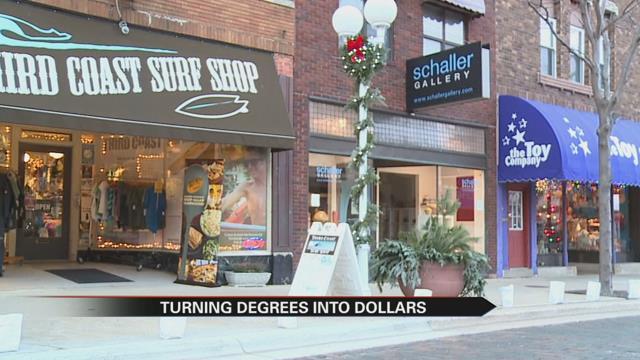 After the warmest November on record, one local business says their sales were also warmer than ever.

In St. Joseph, Michigan sales come and go with the seasons. Typically businesses in this vacation town take a hit when the warm weather goes away.

As manager of the Third Coast Surf Shop, Cam Mammina has four summers and four winters under his belt.

“Obviously summers are our busiest seasons here in St. Joseph. This year we’ve had kind of an unseasonably warm fall and if anything it’s helped bolster our business and make it better,” said Mammina.

With record high temperatures this season, degrees meant dollar signs for Mammina and the team at Third Coast Surf Shop.

“It has not been a bad thing for us at all. Compared to last year’s November we’re up 15-percent for this November so far,” said Mammina.

Many local surfers and paddle boarders may be spending longer in the water this season, but one of those late season surfers is more than ready to put away his board.

As owner of the new soup shop downtown, Mussman is depending on the chilly weather to bring customers inside.

On Friday Mussman took up shop at the Third Coast Surf Shop and sampled his soups for some of Mammina’s customers, hoping that a scoop of something hot might convince these sun lovers that winter isn’t so bad after all.

“We like it to be about 35 degrees and raining for soup. You come in for that bowl of comfort and we bring those intangibles to life,” said Mussman.