Record warmth today, but not the warmest start to November 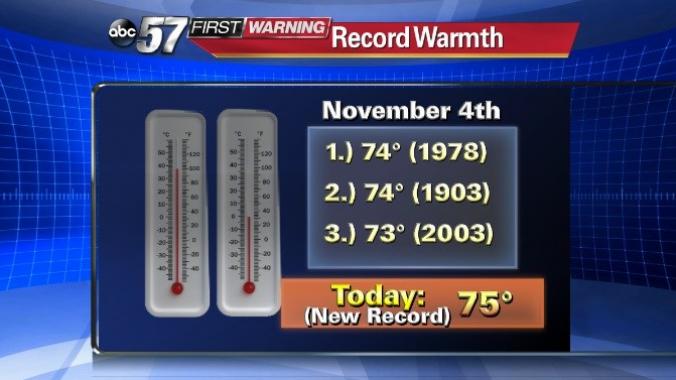 It’s hard to believe that by this time last year, we had already experienced our first snowfall (Halloween 2014 was snowy and brought with it bone-chilling cold).  Another shocking fact- this is not the warmest start to November on record.  Even though we reached at least 70° every day since November 2nd, November 4th reached a new record of 75°, breaking the previous record of 74° set in 1978 (Fig. 1), other years are still in the lead for the warmest start to the month of November.

We are tracking one more day with highs reaching into the 70s.  It isn’t likely that we will break another record like we did today, but we will be in record territory.  We could tie for the third warmest with 73° (Fig. 3).

Rain moves in late Thursday night along with a cold front that will usher in much cooler (and more seasonable) temperatures just in time for the weekend.  Stick with ABC57 News for the latest updates to your weekend forecast and beyond here.