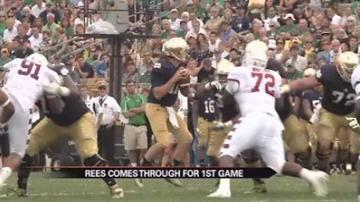 NOTRE DAME, Ind. -- Quarterback Tommy Rees came through for the Irish against Temple. He helped his team to 1-0 on Saturday. Rees said after the game the Irish won 28-6 by sticking to their game plan.

“I think we had good balance and we were pretty consistent in what we're doing but we know we can be better and we know we have a lot of improvement where we can do it. And we're excited about growing this offense,” said Rees.

Temple got on the board in the final seconds before halftime.

The Owl’s running back Kenny Harper scored with 1:01 left on the clock, but Jim Cooper’s field goal attempt was blocked.

The Irish answered when Rees connected for 66 yards to tight end Troy Niklas with 43 seconds left. Notre Dame led at halftime 21-6. In the third quarter Rees found running back George Atkinson III for a 2 yard touchdown.

"We're happy with how they guys came out and played, but we know we got to get better coming into Michigan and week and week,” said Rees.

The team travels to Ann Arbor next week to face Michigan.