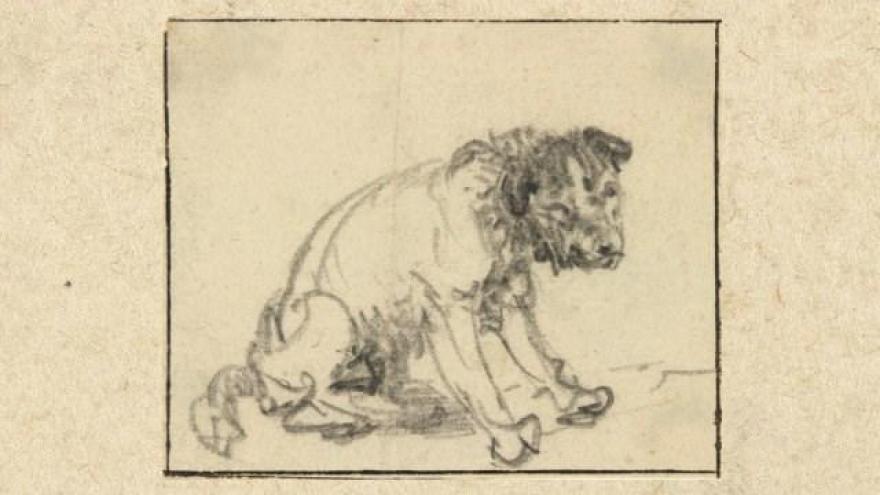 (CNN) -- A chalk drawing of a dog has been identified as a work by Dutch master Rembrandt van Rijn, after it spent almost 250 years mistakenly credited to a German painter.

The discovery of the work's true author has been described as "a sensation" by the Herzog Anton Ulrich Museum in Braunschweig, Germany.

Known as "the Braunschweig terrier," the image is believed to date from around 1637; it has been in the museum's collection since 1770.

Professor Thomas Doring, the museum's curator of prints and drawings, was first alerted to the error two years ago while cataloging the museum's 10,000 drawings for a digital archive.

"It's been on display for decades under the name of Johann Melchior Roos," he told CNN, "so the idea that this could be a Rembrandt was never considered before.

"But the boldness of the strokes, the variations in the shading from very gentle to quite violent and the expressive gaze [of the dog] -- these are very typical idiosyncrasies of Rembrandt's work."

Doring said his experience cataloging drawings by Rembrandt and his pupils during an earlier project was key to the discovery.

"I was used to looking out for the differences between Rembrandt's work and drawings by other artists," he explained.

To find out whether his suspicions were correct, he visited Vienna, Amsterdam and Paris, studying Rembrandt drawings and enlisting the help of other Rembrandt experts.

He said the response to his painstaking work had been unanimously positive.

"Two of the three leading scholars of Rembrandt's drawings told me they were fully convinced that this is a Rembrandt," he said. "Since then, the third has contacted me to say he also has no doubts."

"It's extremely rare for all of the experts in a field to agree on an issue as controversial as this," said Doring.

Rembrandt included many dogs in his paintings, and practiced by sketching animal studies in chalk.

According to a statement released by the museum, "the Braunschweig terrier" is very similar to the barking, jumping dog in Rembrandt's 1642 painting "The Night Watch", the star attraction at Amsterdam's Rijksmuseum.

The dog drawing, now with the correct artist's name attached, is to go back on display at the Herzog Anton Ulrich Museum as part of an exhibition that opens in April.