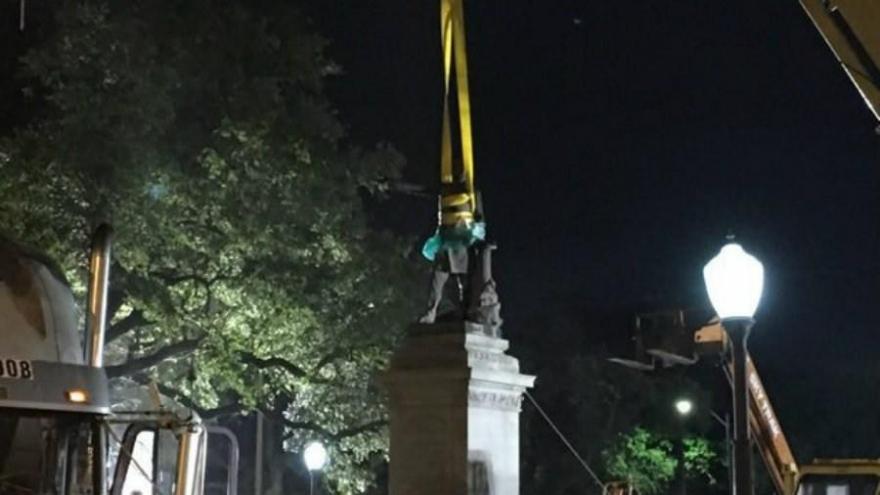 (CNN) -- Some Southern lawmakers want to keep Confederate monuments and symbols right where they are. They're proposing new state laws to keep them in public by banning local governments from removing the controversial landmarks.

In 2015, calls to remove Confederate symbols and monuments heated up after the massacre of nine black parishioners in a Charleston, South Carolina, church by a self-described white supremacist.

After the shooting, South Carolina lawmakers voted to remove the Confederate flag from statehouse grounds. Alabama confronted the issue by taking down Confederate flags from the state Capitol, while other states ended Confederate specialty license plates.

On Thursday, the city of New Orleans removed the statue of Confederate President Jefferson Davis as part of an effort its City Council started two years ago to take down four Confederate monuments.

At least 60 publicly funded symbols of the Confederacy have been removed or renamed since the mass shooting in Charleston, according to the Southern Poverty Law Center.

But some lawmakers are striking back by drafting state laws that would bar local governments from removing any more Confederate monuments and symbols.

Similar laws already exist in states such as North Carolina and Tennessee that prevent local authorities from removing war memorials from public places. Last year, a Tennessee law kept the city of Memphis from relocating a statue of Nathan Bedford Forrest, a Confederate lieutenant general whom many historians consider the first grand wizard of the Ku Klux Klan.

Proponents say that the emblems and landmarks represent history and heritage, and that efforts to remove them is political correctness run amuck. But critics say the monuments are painful, and pay homage to slavery and racial injustice.

Here are efforts underway in some states to prohibit such removals and where they stand now:

Called the Louisiana Military Memorial Conservation Act, the bill bars all structures, plaques, statues or monuments that mark certain US wars, including the Civil War, from being "altered, removed, relocated, or destroyed."

It allows local governments to take down a memorial only if voters approve the action at "an election held for that purpose." The bill also allows for the state to take action to protect, preserve or repair a memorial.

House Bill 71 passed its third reading in committee last week and heads to a floor debate on Monday.

The bill is being considered as New Orleans pulled down a Confederate monument -- the second of four -- this week after years of debate and legal battles.

Even if the bill passes, it's unlikely to have an effect on the city's efforts to take down two remaining monuments. The statues of Confederate generals Robert E. Lee and Pierre Gustave Toutant Beauregard are likely to have been dismantled by the time the state bill could pass and go into effect.

Both the state Senate and House approved the Alabama Memorial Preservation Act of 2017, which prohibits making changes to standing monuments, including those honoring the Confederacy.

After it goes through the Senate again, the bill could end up on the desk of Alabama Gov. Kay Ivey.

Senate Bill 60 would bar the "relocation, removal, alteration, renaming, or other disturbances of monuments located on public property which have been in place for 20 or more years."

Local governments that want to change a public monument would have to petition a newly created Committee on Alabama Monument Protection.

State Democrats are fighting the bill.

This year, several proposals popped up in the Legislature trying to force the universities to fly the state flag.

One Senate bill required public universities to "prominently display and fly the state flag each day of the year" to qualify for tax exemptions.

Another proposal sought to withhold 25% of a university administrative head's salary if his or her school didn't fly the flag.

Those measures died in committee during this year's session.

Backlash to local governments removing Confederate monuments propelled a Virginia bill through the Legislature and onto the desk of Democratic Gov. Terry McAuliffe last year.

The bill would have prevented local governments from moving or changing war memorials.

McAuliffe vetoed the measure last year, explaining in a statement that "this legislation would have been a sweeping override of local authority over these monuments and memorials including potential ramifications for interpretive signage to tell the story of some of our darkest moments during the Civil War."

There's still controversy over several Confederate monuments, including one of Robert E. Lee in a park in Charlottesville.

CNN's Emanuella Grinberg and Keith Allen contributed to this report.