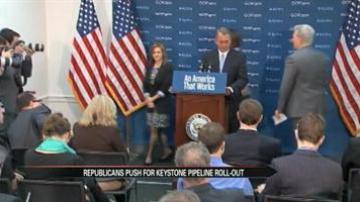 The debate over the Keystone XL pipeline has started to heat up.

Republicans are pushing the President to use his executive power to get the project rolling.

After extensive research a federal government report raises no objection to the project.

It would carry oil from Canada to refineries in Texas.

Obama's Chief of Staff said the White House wants other federal agencies including the Environmental Protection Agency and the Department of Energy to weigh in on Keystone before giving the project the green light.