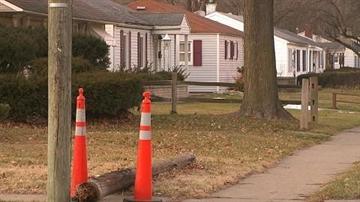 The handmade plywood sign was posted on the corner of Miami Street and Chippewa Avenue, with the approval of the land owner.

Eileen King lives at the home on the corner and is a union worker. “Republicans = the end,” read the sign.

The sign was put up as a protest against right to work legislation.

King is concerned that legislation would fundamentally impact her future job opportunities.

The sign caused a stir on King’s street, even among fellow democrats.

It was up for about a day and a half before someone took it down.

King could not say if the signs creator removed it or if it was stolen.

Either way, she is glad she had a chance to share her opinion. “I thought it would just be there for at least a couple more days so that many more people would see it,” said King.

Other democrats living in the neighborhood were glad to see the sign go. “I vote democrat but I don’t want to see that in a yard,” said Don Hegland. “If they took it down and took off with it, they’re welcome to it as far as I’m concerned; use it for firewood,” said Henry Bulger.