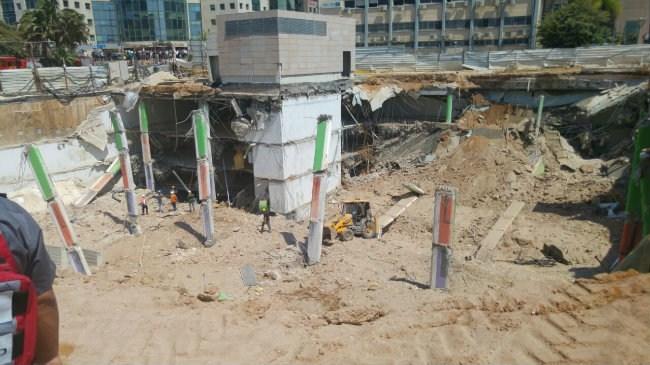 JERUSALEM (CNN) -- At least five workers remain trapped after the collapse on Monday of a Tel Aviv parking garage under construction, police in Israel said.

At least two people were killed and about 20 others were injured, police said. One of the dead is a 28-year-old foreign worker, from Ukraine.

Israel Defense Forces are leading the rescue effort and teams worked around the clock to locate and extract the construction workers. There's no word on the cause of the collapse.

"The ongoing effort consists of over 300 soldiers from the Search and Rescue battalion and the Canine Special Forces Unit," IDF said.

Witness Sraya Listenberg said the implosion was so intense, it felt like an earthquake.

"Everything fell down in one second," he said.

The four-story, underground parking garage was under construction when it gave way in a high-tech area of northern Tel Aviv. The upper three floors imploded; the lowest floor is believed to be about 50 feet underground.

As rescue teams tried to find the trapped workers, authorities feared another collapse of the incomplete, unstable structure.

Listenberg said the disaster could have been more tragic. The garage collapsed during a lunch hour, when some construction workers were eating outside.

"They had lots of luck," Listenberg said.

CNN's Ian Lee and Abeer Salman contributed to this report.