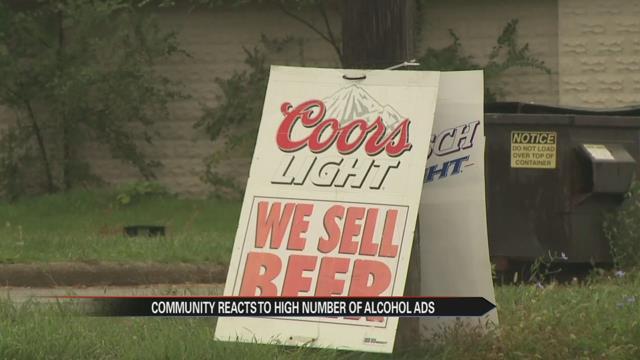 The city of Benton Harbor has 4 of the 60 liquor licenses in Berrien County, but more booze is sold in that city than any other location in the county. Last year that total was almost $2-million.

In September, a controversial blog post called Benton Harbor one of the drunkest cities in the state.

Health officials said this is a problem that’s affecting the city’s youth.

Marlon Easley was buying beer at A & D's liquor store in Benton Harbor. While he supports the business and likes alcohol, he believes the alcohol signs are excessive.

Easley said, “All you gotta do is look at how many liquor stores are on every block. They try to make it so it’s the only thing for you to do.”

Easley said, “Instead of having like parks and job fairs, we have liquor stores.”

According to officials who studied the affects of liquor advertisements in Berrien County, youth in the area are tapping in to the alcohol problem.

Tracy-Ann Jennings said, "16% of youth in Berrien County have tried an alcohol product by the time they’re 13-years-old.”

Jennings said, “We don’t brand ourselves as the drunkest city in Michigan because we’re not that. But we do want to encourage our community members to be aware.”

Jennings first took her plea to the city commissioners two years ago through the plan “operation storefront.” It was a movement to reduce alcohol and tobacco advertisements that could negatively impact the community.

An ordinance to limit the signage didn't pass but City Commissioner at large Mary Alice Adams said it's not as easy as it seems.

Adams said, “If I was a store owner, of course I’m entitled to my advertisement but there should be a limit.”

John Romhilt said, “If the signs weren’t there people could still go in the store and buy it.”