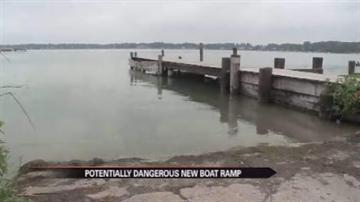 EDWARDSBURG, Mich. -- The battle between homeowners and the Michigan Department of Natural Resources is heating up. Residents along Eagle Lake in Edwardsburg want the DNR to reconsider a proposed boat ramp they say is poorly planned and could endanger lives.

Eagle Lake is facing some potential changes, but not everyone is happy about the changes.

"It's just going to get very crowded. We're very concerned about the safety of the people who come here, and the people who live here," said Keith Dennis.

Dennis is one of many residents concerned about a plan introduced by the Michigan DNR that calls for a new public boat ramp and 40 parking spaces on the east side of the lake.

The concern is it would go in right next to a curve, on the bottom of a hill in an already congested area.

"During the weekend, and certainly beginning and end of the season, that place is just an accident waiting to happen. Matter of fact - accidents do happen," said Dennis.

Some say ignoring the current boat ramp isn't an option.

"There's no place really to get off the road to prepare your boat to put in the water," said angler Dave Cuthbert.

Cuthbert says he wouldn't risk braving the lake's shallow water, but he says it's a great place to fish.

"They don't need to put in 40 parking spots, if they put in half-a-dozen, ten, that would be fine," said Cuthbert.

He's hoping homeowners and the DNR can reach some sort of compromise on how to balance public waters with public safety.

The DNR says they're still in the planning stages and they're looking into a way to allow boaters to launch without having to re-enter the roadway.

Something the homeowners association doesn't think is possible.

Local and state agencies will determine that in the next coming weeks.