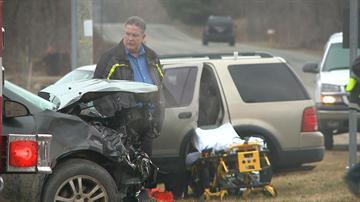 CASS COUNTY, Mich. – People who live at the intersection of Dailey Road and M-60 where two-cars collided on Wednesday, sending two young women to area hospitals, say the intersection is one of the most dangerous in Cass County.  Neighbors say they’re tired of drivers being killed in front of their homes.

“You just become numb to them because there’s so many wrecks here,” explained Barry Krueger, whose family has owned a farm on the intersection for 26-years.  “This place is good for two a year, at least two good wrecks a year.”

Krueger’s watched helicopters airlift crash victims from the field in front of his family’s farm three times.  On dozens of occasions he’s come to the intersection to see cars that have been thrown violently into his parent’s yard.

“We’ve had cars hit my Dad’s garage, wind up here in the side yard,” Krueger described, pointing to each location a smashed car has landed.  “All four corners of this intersection there’s been cars landed at one time or another.”

He explained that the most common cause for crashes is drivers either not seeing or disregarding the stop signs on Dailey Road.  The Cass County Sheriff’s Department believes that was the cause of Wednesday’s accident as well.

“If you don’t that there’s a stop sign here and you don’t catch the sign that says stop ahead you’re going to go right through it,” he said.  “It warrants a light or some flashing light of some sort.”

"There was a five fatality car wreck there, a car hit the church and killed five people,” he explained.  “That warranted, I guess, for a light to be there."

Krueger said he has been pleading for years for a traffic light to be installed at Dailey Road and M-60.

"I've talked to law enforcement about it in the past and they said there's not been enough fatalities here in this corner,” he said, shaking his head.  “It takes human life to make a light exist or come about and that's sad."

ABC57 called both the Cass County Road Commission and the Michigan Department of Transportation but couldn’t get through to anyone who could explain the decision making process for installing traffic lights or whether or not a light could be installed at the intersection.