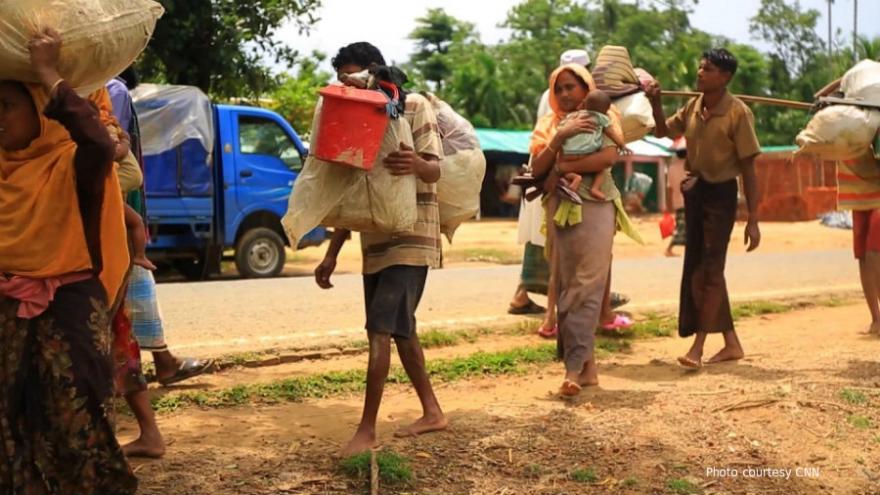 (CNN) -- A day after Amnesty International accused Myanmar's military of deliberately torching Muslim-minority Rohingya villages near the Bangladesh border in a campaign of "ethnic cleansing," another rights group is leveling the same charge.

"Our field research backs what the satellite imagery has indicated -- that the Burmese military is directly responsible for the mass burning of Rohingya villages in northern Rakhine State," Deputy Asia Director Phil Robertson of Human Rights Watch said Friday. Myanmar was formerly known as Burma.

"The United Nations and member countries should urgently impose measures on the Burmese government to stop these atrocities and end the forced flight of Rohingya from Burma," Robertson said.

Up to 400,000 Rohingya -- of which, about 60 percent are children -- have fled to Bangladesh since August 25 to escape the latest wave of violence, UNICEF, the UN agency overseeing children, said in a statement Thursday.

"The evidence is irrefutable -- the Myanmar security forces are setting northern Rakhine state ablaze in a targeted campaign to push the Rohingya people out of Myanmar."

The Amnesty report identifies at least 80 large fires in predominantly Rohingya-inhabited areas since August 25. Amnesty says it has matched satellite images of the burnings to eyewitness testimony and images of homes being torched.

"There is a clear and systematic pattern of abuse here," Hassan said.

"Security forces surround a village, shoot people fleeing in panic and then torch houses to the ground. In legal terms, these are crimes against humanity, systematic attacks and forcible deportation of civilians."

The report also claims that satellite images from mixed ethnic areas show that non-Rohingya areas "appear to have been left untouched."

The Rohingya are considered one of the most persecuted populations in the world. They've lived in Myanmar for centuries.

But Myanmar regards them as illegal immigrants, a view rooted in their heritage in Bangladesh, and has denied Rohingya residents the rights of citizenship.

Meanwhile Bangladesh says the Rohingya are Burmese. As a result, they're effectively stateless.

The latest outbreak of violence in Rakhine began in August after a series of reported attacks by Rohingya militants on police border posts. In response, the Myanmar military and Buddhist nationalists launched a brutal crackdown on the Rohingya.

Almost 20,000 Rohingya have arrived in Bangladesh on average each day since August 25, according to the UN.

The Myanmar government claims it is fighting a terrorist insurgency, and says it is targeting terrorists suspected of masterminding the August attacks. "Some of them are directly involved with terrorist activities and some are sympathizers for the terrorist group," Zaw Htay, a spokesman for Myanmar's Presidential Office, wrote in an email to CNN.

But the refugees tell a different story. They accuse the security forces of atrocities, including burning villages, firing on civilians indiscriminately, and family members being taken away and never heard from again.

On Wednesday, the plight of the Rohingya prompted a rare rebuke from the UN Security Council.

In the statement, the first the UN's most powerful body has made on the situation in Rakhine in nine years, the 15-member council acknowledged militant attacks on Myanmar security forces but "condemned the subsequent violence," and called for "immediate steps to end the violence."

Myanmar's de facto leader, Aung San Suu Kyi, has been criticized over her response to the mounting violence, although some argue that she has little power to change the situation.

The 1991 Nobel Peace Prize laureate has canceled a trip this month to the UN General Assembly in New York as the crisis escalated.

"There must be much more pressure on Aung San Suu Kyi and Myanmar's military leadership who are still carrying out abuses to end this carnage," Hassan said. "It's time for the international community to wake up to the nightmare the Rohingya are living through."