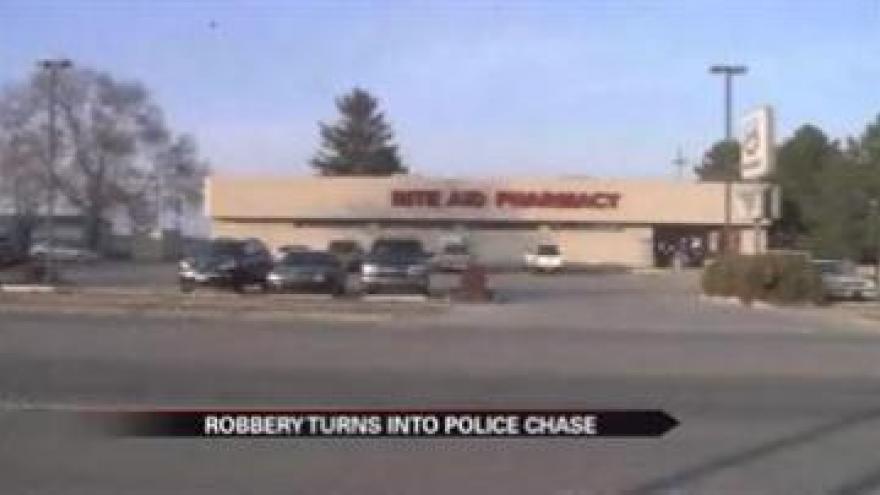 BUCHANAN, Mich. – Right Aid employees in Buchanan were shaken up after they were robbed and threatened with a knife. Then the armed robbery turned into a police chase.

Officers said this happened around noon Wednesday. Fortunately none of Rite Aid’s customers or employees were hurt during the stickup.

“I heard a siren and I turned around to look and there was a speeding police car and we just thought maybe there was an accident down the street,” said Marathon owner John Adcock.

But it was not an accident.  According to police, 54-year-old Kurt Boelcke went to a Rite Aid Pharmacy, threatened an employee with a knife and demanded morphine.

Luckily, Buchanan patrolman David Capron was just a few blocks away when the 911 call came in.

“When I got into the parking lot, he was in his vehicle backing out.  I attempted to block him in, but it was unsuccessful,” said Capron.

That is when Boelcke lead police on one wild ride.

“He lost his front tire when making a turn and hitting the curb,” said Capron.

The high speed pursuit lasted about five minutes, until they got to the intersection of East River Road and Mead Road.

“We left the city limits into Buchanan Township and went through several different roads,” said Capron.

The chase ended when the suspect hit into a Comcast box and then crashed into a fence. The fence was not the only thing broken in this car crash.

Patrolman Capron transported Boelcke to Lakeland Hospital and then to the Berrien County Jail.

Adcock said he is glad the cops caught the bad guy.

“Oh I am delighted,” said Adcock.

But he said he never doubted them anyway.

“We are prepared for things.  We have a good police force," said Adcock. "They watch out for things.  They come around quite often."

Boelcke is being charged with armed robbery, fleeing and eluding police and possession of morphine without a prescription.