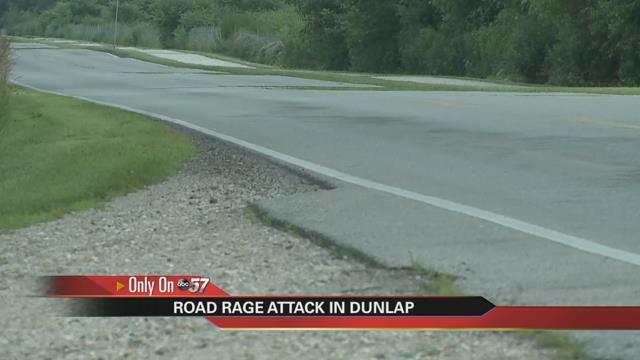 A road rage incident in Dunlap ended when the suspect tried to run over another driver after he pointed his gun at him. The Elkhart County Sheriff's Department is investigating this case as criminal recklessness and they said it happened in the 23000 block of County Road 45 around 10:45 Wednesday night.

The victim's wife and two kids were in the car at the time of the incident.

ABC57 will not be revealing their identities for their personal protection.

The victim's wife said they dropped a family member off at the Washington Gardens Apartment Complex in Elkhart when a driver began tailing them.

The victim's wife said, "Road rage is one thing, people have it, but there’s no reason for a gun to be drawn.”

She said the driver nearly ran them off the road.

“Up by Oxbow School he swerved past us and almost put us into two poles. We kept on going, I had called 911 at that point.”

She said they came to a 3-way stop on County Road 45 and the situation nearly turned deadly.

“My husband got out and stepped out of the car and just asked him 'What’s your problem?' and the man got out and said get back in your vehicle and pulled a gun out.”

She said her husband put his hands up and started walking away from their vehicle.

At that point she said the suspect put the gun down, backed up, and tried to run over her husband.

“He took off full force, he hit my husband, my husband was on top of the car, he came to a complete stop in the middle of the intersection, which threw my husband off the car, and took off.”

She said she thought her husband was dead. He was taken to the hospital with a neck injury and several broken bones.

“I couldn’t cry because I was so shaken up because I’d never seen anything like that before in my life.”

Captain Bradberry at the Elkhart Sheriff's Department said this is an ongoing investigation and no one is in custody.