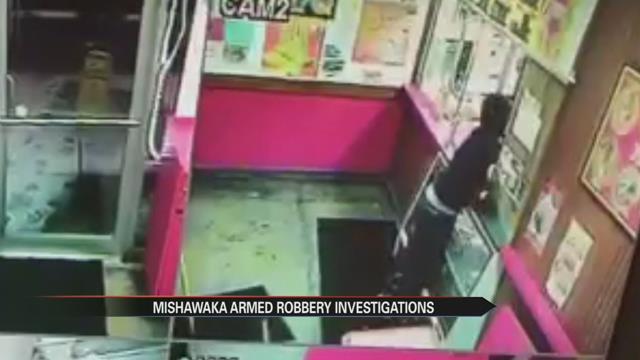 Police in South Bend and Mishawaka need the public's help.

They’re looking for a suspect who could be the same person robbing multiple Michiana businesses at gunpoint.

It started at a Family Video in Mishawaka.

Manager Steve Grounds says his store was robbed by a similar suspect multiple times in January.

“He walked in. He gave me a bag and said put the money in the bag, and within 60 seconds he was in and out of the store,” Grounds said.

After the first time the Family Video was robbed they installed security cameras.

But even then, the suspect wasn’t easy to recognize on video when he returned.

A suspect with a similar description robbed the JJ Fish and Chicken in South Bend two weeks ago.

“He just brandished a gun and asked my coworker for all the money out of the cash register. He was in and out within probably 10 to 15 seconds,” Brenda Barnes, manager of JJ said.

She says this happened just before nine at night.

At around the same time, a few days later on Wednesday, a similar crime was committed at Tiki Tan, right next door to JJ.

“We actually had someone come in just before closing on Wednesday evening, and actually held up the employee at the time,” Doug Kronk, owner of Tiki Tan said.

All businesses say they’ve never been robbed before this.

Now, they’re all taking extra steps to secure themselves, like new cameras.

Along with Michiana Crime Stoppers, they want everyone to look out for a suspect.

The suspect’s description is a black male with medium build to stocky build.

The managers say their suspect wore a mask and dark clothing.

If he is indeed the same suspect the businesses have had enough of him.

“It just kind of ruins it for everybody and makes the community scared,” Barnes said.

All three businesses are open as usual and managers say they’re now more secure than ever.

If you think you might know who this suspect is you’re encouraged to give Michiana Crime Stoppers a call at 288-STOP.