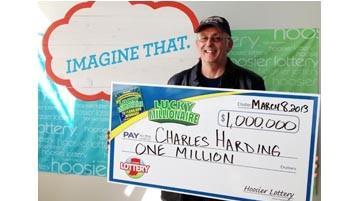 INDIANAPOLIS – A Rochester, Indiana man has won a million dollars in the Hoosier Lottery’s Lucky Millionaire scratch off ticket.

Charles “Butch” Harding doesn’t normally play the lottery, but purchased this ticket on a lark. He said the clerk recommended it.

"She suggested I try a new pack of tickets if I was going to buy one," said Harding. "I thought, 'Well, that's cool,' so I did."

Harding says he doesn’t plan on changing his lifestyle after the big win.

He also said he might splurge and buy himself season tickets for Notre Dame football.

Harding added that he would continue going to work every day, but plans on spoiling his grandchildren.