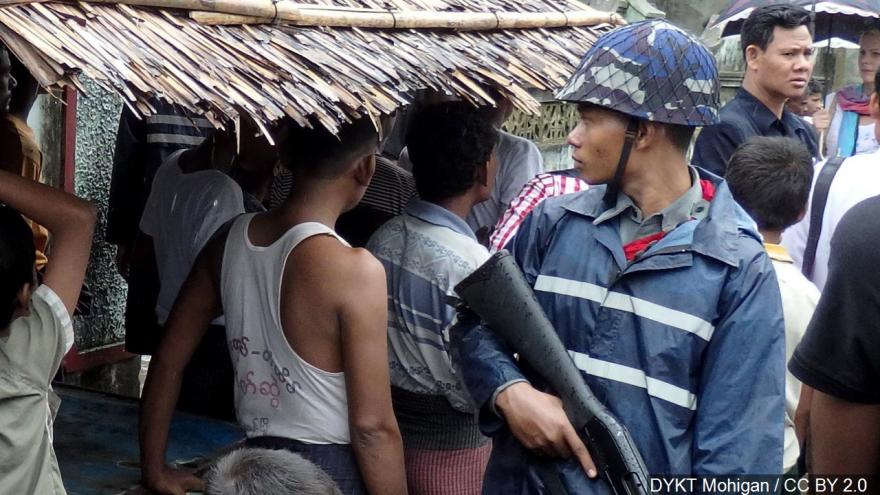 (CNN) -- The monks, clad in vermillion robes and flip flops, line up from old to young to receive a meal in their alms bowls -- rice, vegetables, cookies -- all donated by local villagers.

It's a potent act of religious devotion that takes place every day across countless communities in Myanmar, an overwhelmingly Buddhist country.

But powerful clerical voices here believe their faith -- and by extension, these traditions -- is in danger.

The main threat? Islam, says Thaw Parka, a monk who speaks for a hardline, monk-led Buddhist nationalist group known as Ma Ba Tha -- the Association for the Protection of Race and Religion.

Its role in sowing anti-Muslim sentiment is coming under scrutiny as a brutal crackdown unfolds in Rahkine State in western Myanmar, sending more than 600,000 Rohingya Muslims fleeing to Bangladesh.

"It is not like what the international community is saying. It is not genocide at all," the 46-year-old abbot told CNN in September from ZayTaWon DammarYone Monastery on the outskirts of Yangon, where he leads more than 100 monks.

Thaw Parka describes these claims as "wild accusations" and believes Buddhists in the state are the main victims of the violence.

"Our ethnic people are starving. They abandoned their villages. It is impossible to make a living, (If) they remain in their village."

It's a view shared among many of the country's Buddhist majority, who have little sympathy for the Rohingya and have reacted defensively to the international outcry. Few use the term Rohingya, instead calling them "Bengali" -- a popular slur that compounds their reputation as illegal immigrants.

These attitudes confound the romantic image many in the West have of Buddhism as a tolerant faith whose adherents wouldn't hurt a fly. Monks, however, do have a long history of political activism in Asia that more recently has taken on an ultra-nationalist and extremist hue in places like Myanmar and Sri Lanka.

It's difficult to see how Muslims, or any other religious group, could pose a threat to Myanmar's dominant religion.

Almost nine in every 10 people in this country of 51.5 million are Buddhist, compared to a Muslim population of just 1.2 million. This doesn't figure include the estimated 1.1 million Rohingya Muslims, who are stateless as Myanmar refuses to recognize them as citizens, and they are not officially included in Myanmar's 2014 census data.

Thaw Parka says that he and his group work in harmony with "educated Muslims who live among the indigenous people of Myanmar" and he only opposes Muslim extremists and terrorists that threaten Myanmar's sovereignty.

"We have many Muslims among our friends. We hang out. We work together. We do charity work together. There was no problem. But with some Muslims who are in contact with a form of extremist terrorist, it is very difficult for peaceful existence."

The monks say their fears for their faith are also fed by wider concerns about a resurgent radical Islam and the belief that Buddhism is under siege.

One English-language pamphlet produced in 2015 by the group as a "must-know, must-read, must-keep booklet for every Myanmar citizen," says different religions are "devouring" the faith of Myanmar. It warns that if Buddhist leaders don't take care "Buddha's teaching will soon disappear" -- something the booklet says already happened centuries ago in nearby Mulism-majority Malaysia and Indonesia.

Richard Horsey, a political analyst and one of the authors of a new report on Buddhist Nationalism by the International Crisis Group, says these fears are also a reflection of what modernity could mean for the monkhood as Myanmar opens up to the world under the new government of State Counsellor Aung San Suu Kyi.

"These monks look at Thailand, which has embraced a Western outlook and consumerism, and that has affected the standing of monks there," he says.

"They feel the (Myanmar) government is weak on the protection of Buddhism and keeping the morals of the country intact."

Ma Ba Tha has been at the forefront of anti-Rohingya protests since it first rose to prominence in 2014, It has also emerged as a political force, successfully lobbying for a series of laws aimed at restricting interfaith marriage.

Its most prominent face has been Ashin Wirathu, a controversial monk based in Mandalay. He spent time in jail for inciting anti-Muslim violence before founding the now banned "969" movement that called for a boycott of Muslim businesses.

In 2015, he told CNN that Muslims "take many wives and they have many children. And when their population grows they threaten us." "And," he concluded, "they are violent."

Thaw Parka said Wirathu had worked "hand in hand" with Ma Ba Tha since its inception. However, he stressed the firebrand monk didn't officially represent Ma Ba Tha -- a fairly loose coalition of monasteries and supporters.

"People want to attack U Wirathu, they cherry pick his extreme words," he said.

The monks view international media and their coverage of the Rohingya crisis with deep suspicion and carefully took notes during our hour-long interview.

"When we look at them, the news sources, (we find) that they did not investigate themselves. They fell for what (the Rohingya) said. They believed them and made accusations."

"We don't want to have these kind of grievances. You have to go to the affected areas and investigate yourselves."

Myanmar has largely blocked international media from traveling to the affected northern areas of Rakhine State and journalists that have been allowed to go have do so under government escort.

Ma Ba Tha remains popular in Myanmar despite efforts by the civilian government led by Suu Kyi, a Nobel Peace prize winner who spent years under house arrest, to limit its influence.

In May, Myanmar's highest Buddhist authority, the Sangha Maha Nayaka Committee, a government appointed body, cracked down on the group, ordering it to take down signs. It's also tried to ban Wirathu from giving sermons for one year.

In response, the group decided to change its official name to "Buddha Dhamma Parahita Foundation" but on the ground there's been little impact on the way the group operates, says Thaw Parka.

"There is no change. It is just taking down sign boards. Some do, some don't."

"We are in compliance with the constitution and we have a righteous stand," he adds.

As international pressure mounts, the Myanmar leader has shown scant solidarity for the plight of the Rohingya Muslims and there was little in her national address in September and subsequent comments on the crisis that would upset Buddhist nationalists like Ma Ba Tha.

Suu Kyi hasn't denounced the alleged atrocities against the Rohingya community and claimed the government needed more time investigate the exodus from Myanmar of more than 600,000 members of the minority Muslim group.

Next week, she'll host Pope Francis, who visits Myanmar for the first time. In the past, he has described the Rohingya as his persecuted "brothers and sisters" -- language that could inflame tensions in Myanmar where few use the word Rohingya, a politically and emotionally charged term.

'Much more than an extremist group'

The government's moves to rein in the group fail to take account of the fact that Ma Ba Tha is a social movement that appeals to many ordinary Buddhists, says Horsey, the political analyst.

Thaw Parka's monastery, like others, takes in orphans and educates the sons of poor families. Posters at the nearby Insein Ywama Monastery, which serves as the headquarters for Ma Ba Tha, offer classes in English, computing and coding for members of the local community.

"It's much more than an extremist group and efforts to ban it miss this point. It doesn't take account of the fact these monks are extremely revered," Horsey says.

"Wirathu has notoriety but many others involved in the group are seen as the leading monks in the country and they have enormous religious legitimacy."