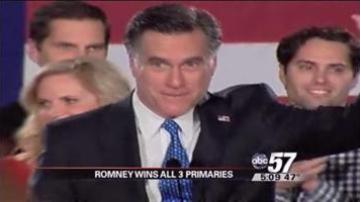 It was a great night on the campaign trail for Mitt Romney.

As predicted he took all three primaries Tuesday night. That means he should pick up 98 delegates.

That's more than double what Santorum has. According to exit polls, 8 out of 10 Wisconsin voters, no matter their preference of candidate, expect Romney to be the GOP nominee.

The win in Wisconsin was particularly important because it's expected to be a battleground state this fall.

Now Romney is moving his focus to President Obama.

Romney's rivals have not conceded.