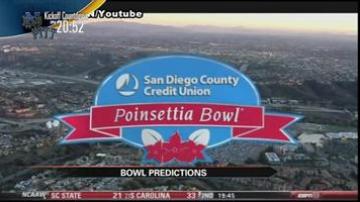 Even though the regular season hasn't ended, you may be wondering where Notre Dame's post-season action will be played. We rounded up the latest predictions.

The New Year's Day game is played in the Cotton Bowl.

But Brad Edwards at ESPN picks the Irish in the New Era Pinstripe Bowl.

This one's not played in the sun of the south. The Pinstripe Bowl plays on December 28th in Yankee Stadium.

The Bleacher Report holds a remote chance for Notre Dame to play in the BCS Orange Bowl.

If the blue and gold get the invitation, the likely opponent would be Florida State.

What would you think of a Notre Dame, Ball State matchup?

The Bleacher Report says it could happen the day after Christmas on Ford Field in Detroit in the Little Caesars Pizza Bowl.

But one reason this bowl might not happen - it pays out $500,000 per team - meaning Notre Dame likely would decline the invitation because the university would lose money on the deal.

The most likely bowl bid for Notre Dame, according to the Bleacher Report, is the Poinsettia Bowl in San Diego.

That's because Army, who has an automatic tie-in with the bowl, has a losing record and won't be bowl eligible.

Notre Dame could get an at-large invitation. A possible opponent in the Poinsettia Bowl is Boise State.