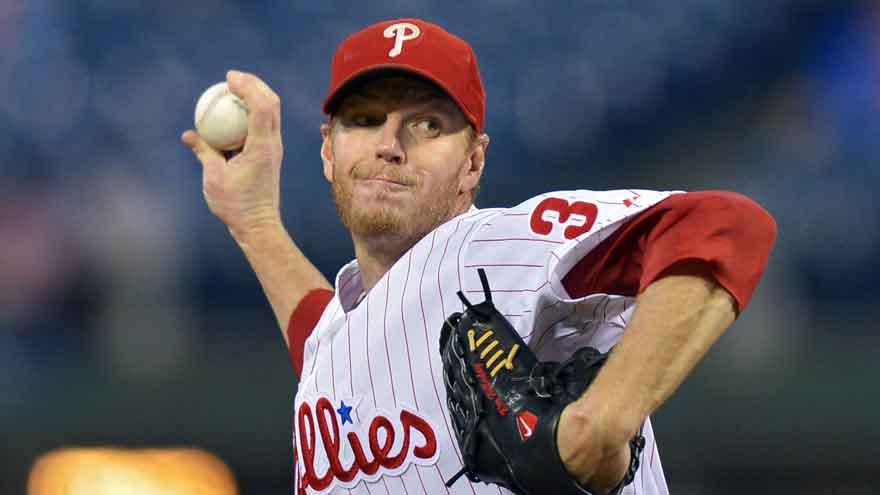 Halladay, 40, was the only person on the two-seater plane that crashed just off New Port Richey on the Gulf coast north of the Tampa Bay area, Pasco County Sheriff Chris Nocco said.

The single-engine plane, an Icon A5, crashed in very shallow water and was found upside down.

A 911 call came in at 12:06 p.m. ET saying that a small plane had crashed. There were no distress calls, the sheriff's office said.

Icon A5s are considered light, amphibious airplanes. They can land on water or land, have folding wings and can be transported by trailers.

In recent weeks, the retired baseball star had tweeted photos of the aircraft. One post said: "I have dreamed about owning a A5 since I retired! Real life is better then my dreams!!"

Halladay pitched parts of 16 seasons in the major leagues, the first 12 with the Toronto Blue Jays. He won the Cy Young for the Jays in 2003, when he went 22-7 with a 3.25 ERA and led the American League with nine complete games.

He was traded to the Philadelphia Phillies before the 2010 season and won another Cy Young in his first year with the team. That season he went 21-10 with a 2.44 ERA and threw a perfect game in the regular season and a no-hitter in his first postseason start. The no-hitter is the only one in National League postseason history.

"There are no words to describe the sadness that the entire Phillies family is feeling over the loss of one of the most respected human beings to ever play the game," a team statement said. "It is with the heaviest of hearts that we pass along our condolences to (his wife) Brandy, (and sons) Ryan and Braden."

The Blue Jays said the club was grief stricken by "the tragic loss of one of the franchise's greatest and most respected players, but even better human being."

Halladay finished his career with a 203 wins and a career ERA of 3.38.

Hall of Famer Pedro Martinez said he would watch while his opponent threw.

"I can't believe it. So many times we competed against each other and even while competing, I wanted to see you!" he wrote on Twitter.

"He was one in a million," said Nocco, the sheriff, who was a friend of Halladay's. "It is a true loss for us. ... His heart was a heart of gold. He was an unbelievable human being."

Nocco said Halladay often spoke of his love of flying.

Former Blue Jays teammate Vernon Wells said Halladay was one of the best pitchers ever.

"I had a front row seat to watch his greatness. RIP Doc," Wells tweeted, referencing a Halladay nickname.

Catcher Bengie Molina played for the Blue Jays in 2006 and said he felt ill when he heard of the news.

"Wow i feel so sick and sad, what a true COMPETITOR and an AWESOME teammate and friend he was and one of the nastiest pitcher I've ever caught! PRAYERS for his whole family!!"

Halladay will be eligible for the National Baseball Hall of Fame in 2019.

The National Transportation Safety Board will investigate the crash.

According to the website of the Federal Aviation Administration, the certification for the plane was issued Monday, meaning the aircraft was brand new.

In May there was a crash of an A5 in California that killed both people on board. The NTSB ruled pilot error was the cause.