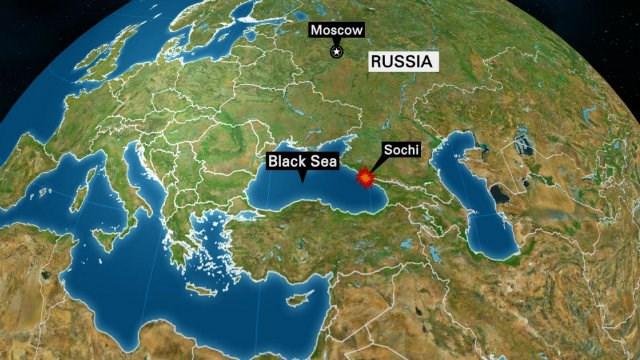 (CNN) -- A massive search and rescue operation is under way in the Black Sea after a Russian military plane crashed Sunday with 92 on board. Thirteen bodies have so far been recovered, as well as more than 150 pieces of debris, the Itar-Tass news agency reported, quoting a source in security agencies.

Terrorism was not a likely cause of the crash, Kremlin spokesman Dimitri Peskov said in a call with reporters Monday. Russia's transport minister said it was assumed the plane had crashed due to technical malfunction or pilot error.

The Defense Ministry said there appeared to be no survivors. Russia is observing a national day of mourning Monday.

The ministry said 3,500 search and rescue personnel are involved in the search.

Searchers have not paused "for a minute during the night," the ministry said Monday. "Experts thoroughly analyzed control data from radio-location equipment and determined the Tu-154's flight trajectory."

Ships, divers and aircraft continue to arrive in the search area. The search-and-rescue operation has 39 ships and cutters, 135 divers and 7 deep-water vehicles.

"Military personnel of the Southern Military district keep examining the shoreline to find and collect the bodies, debris of the plane and personal belongings of passengers," it said.

Divers found the Tu-154's fuselage about a mile offshore in the Black Sea at the depth of 27 meters, RIA Novosti reported.

Earlier Monday a military plane flew 10 bodies and fragments of debris to Moscow, where DNA testing would be carried out, the ministry said.

It said experts had been able to more precisely locate the crash site by using data from radio location equipment, but that the search was complicated by varying sea depths.

The plane took off from Moscow and was headed to the Russian Hmeymim airbase in Latakia, Syria, where Russia has a large military presence, a source told Russia's state news agency Tass.

Why the plane crashed is not yet known.

Russian Transport Minister Maxim Sokolov said Monday that "the major versions do not include the terrorist attack, so we assume that the cause of the crash could be either technical malfunction or pilot error," according to state-run TASS.

It quoted Viktor Ozerov, chairman of the Federation Council Committee on Defense and Security, as saying he completely ruled out terrorism.

"I rule out version of the terror attack completely. It is the aircraft of the Ministry of Defense, the airspace of the Russian Federation, there cannot be such a version," Ozerov is quoted as saying. "The plane had to make a U-turn after takeoff over the sea (and) may (have taken) the wrong direction."

Russian Transport Minister Maxim Sokolov said Monday that "the major versions do not include the terrorist attack, so we assume that the cause of the crash could be either technical malfunction or pilot error," according to TASS.

The Russian Investigation Committee has launched a routine criminal investigation to examine potential "violation of rules of flight safety or preparation," committee spokesperson Svetlana Petrenko earlier told Tass. The committee plans to seize documents and interrogate those who prepared the plane for flight, she added.

CNN Meteorologist Derek Van Dam said no major weather patterns were present at the time of the plane's disappearance.

According to a Defense Ministry list, among those on board were eight crew members, eight soldiers and more than 60 members of the Alexandrov Ensemble, including its conductor Valery Kahlilov.

Since 1928, the Alexandrov Ensemble has grown into a immensely popular tradition due to its unending government support. It has toured the world performing Russian folk songs, World War II anthems and patriotic music, and was dubbed "Russia's singing weapon."

Tass is reporting that at least 12 family members have arrived in Sochi and the rector of the St. Nicolas Church in Sochi, archpriest Dmitry Petukhov, has conducted a service in memory of the flight's victims at an airport chapel.

Another passenger was the famous Russian human rights activist, Liza Glinka, according to CNN affiliate RBC. She was bringing medicine and other supplies to a local hospital in Syria, her colleague and friend Dr. Sergey Kurkov told RBC.

A Facebook page for Glinka's charity "Fair Aid" carried a post mourning "this huge loss for our entire nation."

Nine journalists, including three reporters with Star TV, were also on board, the Defense Ministry said on its television network.

CNN's Sarah Sirgany and Susannah Cullinane contributed to this report.