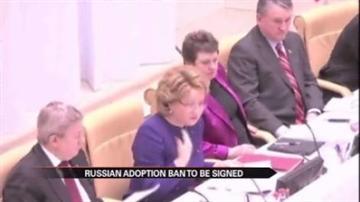 MOSCOW  —  The president of Russia said he will sign new legislation that would ban the adoptions of Russian children by American citizens.

This ban is believed to be Russia's retaliation for a set of human rights sanctions signed into law by President Obama in early December.

Russian officials point to 19 cases where Russian children have died after being adopted by Americas.

This has frozen the adoption process for many Americans leaving them with little hope.

"You have to hope that it is not a door shut but you just know that is simply an obstacle, a delay," said Patrick Griffin. "But we do not know."

He is trying to adopt a Russian child.

Russian officials have said at least 46 cases which are close to completion will be put on hold. And those children will now be offered to Russian families.