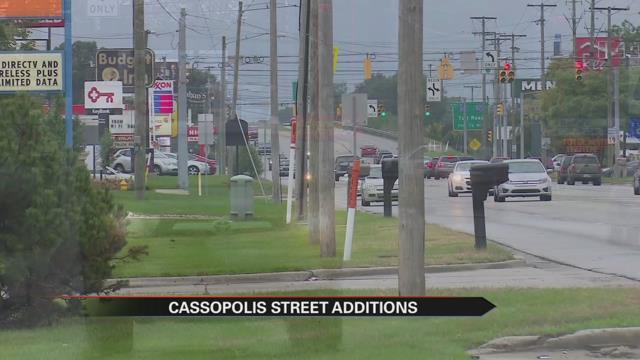 Improvements are coming to Cassopolis Street in Elkhart and they could save lives.

This week the city of Elkhart announced a project to complete sidewalks and add traffic lights to make Cassopolis street safer for pedestrians.

There have been dozens of pedestrian accidents and even a few deaths.

On Friday bikes rode dangerously close to cars and pedestrians were forced into traffic due to missing sidewalks.

One man whose lives near Cassopolis Street has a son with significant disabilities and says he is not taking any chances on the busy street.

“He has an adaptive tricycle he rides and he can ride that thing for four miles but without sidewalks I’m not putting him out in the middle of Cassopolis street,” says Brian Replogle of Elkhart.

Replogle has been advocating for a walkable Cassopolis street for almost a decade.

His son has limited mobility and likes to ride his tricycle but without sidewalks he has not been able to explore his neighborhood for the past eight years.

“There are cars going all the time so if you are riding a bike you have to stay in the street and there is no buffer zone," says Replogle.
The situation is about to get better for those who want to or have to walk along Cassopolis.

This week the city of Elkhart announced sidewalks will be built along the East side of Cassopolis Street next spring.

In 2018 traffic lights will make crossing easier and there will be more sidewalks on the west side of the street.

These all improvement Brian spent years asking city officials for.

“It’s time for it and we are really excited we think it will be great for the community,” says Replogle.

The project will be funded through Cassopolis Street District TIF.