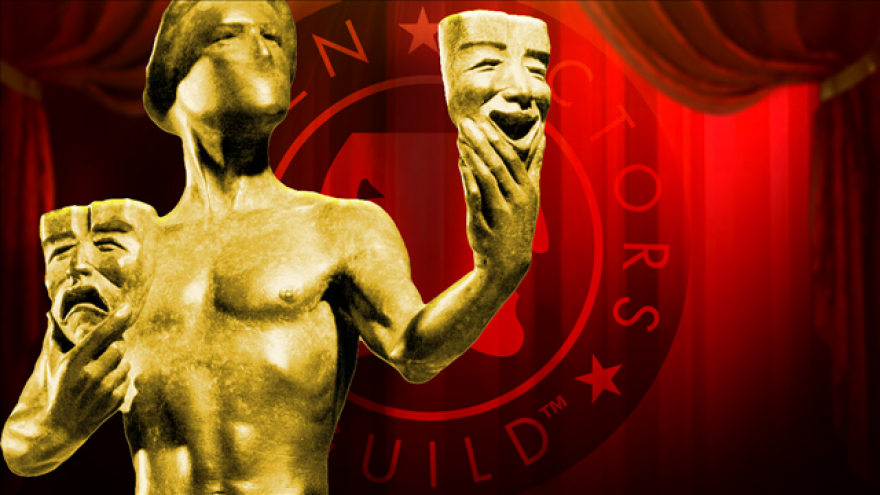 From "Scandal" star Kerry Washington explaining that actors are activists to Ashton Kutcher declaring "I am a citizen of the world," Hollywood did not shy away from what was on the mind of many in attendance -- President Trump's travel ban.

Kutcher, who was announcing the award for outstanding performance by a female actor in a comedy series, greeted "everyone in airports that belong in my America."

"You are a part of the fabric of who we are," Kutcher said. "And we love you and we welcome you."

Kutcher presented the award to "Veep" star Julia Louis-Dreyfus, who said in her acceptance speech hat she is the daughter of an immigrant who fled the persecution of Nazi-occupied France.

"Because I love this country I am horrified by its blemishes," she said. "The immigrant ban is a blemish and un-American."

The award for outstanding performance by a male actor in a comedy series went to William H. Macy for his role in "Shameless.

With so much attention on President Donald Trump's travel ban this weekend, there had been an expectation that at least some award winners would utilize their moment in the spotlight to express their thoughts on the current state of our country.

Several winners touched on the ban, including Sarah Paulson, who won the outstanding performance by a female actor in a television movie or miniseries award for her role in "The People v. O.J. Simpson: American Crime Story."

Amid her remarks Paulson encouraged people to donate to the American Civil Liberties Union.

Legendary comedic actress and "Grace and Frankie" star Lily Tomlin received a standing ovation after her "9 to 5" costar Dolly Parton presented her with the Lifetime Achievement Award.

Tomlin kept the audience in stitches with her acceptance speech, including her advice to young people in the industry.

"Behind every failure is an opportunity someone wishes they had missed," Tomlin said.

Typically, the night is for Hollywood, voted on by Hollywood.

Sunday night, awards handicappers will be watching to see whether the musical "La La Land" continues its domination of awards season.

Winners are determined by members of the Screen Actors Guild. The show has no host, so it's not like other awards ceremonies where the tone is set by the monologue.

At this year's Golden Globes, renowned actress Meryl Streep sparked days of conversation when she used the speech she gave while accepting the Cecil B. DeMille Award to express her concern over Trump's election and actions.

"There was one performance this year that stunned me," she said. "It sank its hooks in my heart. Not because it was good, there was nothing good about it, but it was effective and it did its job."

It's more likely now that someone will follow in Streep's footsteps Sunday night due to the travel ban, and the way that it has already hit home for Hollywood.

Asghar Farhadi, the director of "The Salesman," which has been nominated for the Oscar for best foreign-language film, has said he will not attend this year's Academy Awards in protest against the ban. Farhadi is Iranian, and so would have been kept out of the U.S. due to the ban, but could possibly have requested an exception had he wanted to.

The SAG Awards air simultaneously January 29 at 8 p.m. ET on TNT and TBS. (Both networks are, like CNN, owned by Time Warner.)