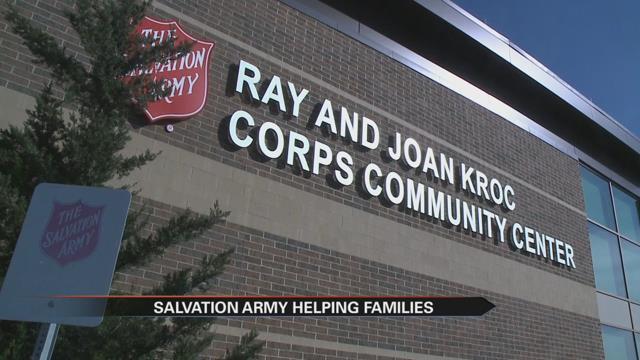 Almost 1,000 families in St. Joseph County will receive financial assistance from The Salvation Army this Christmas. Applications were up by double digits compared to last year.

The Salvation Army did not turn away any family who applied, if they were  there within the times of applications.

Not only were the numbers higher this year, but Major Monty Wandling also noticed something else. The significant amount of people that signed up for assistance for the  first time.

During the last day of sign-up it took staff and volunteers an extra hour to complete everyone’s application.

“We just want to be prepared we don’t know how many will come. But this year we’re right under 1,000, 15 % increase over last year,” said Major Wandling.

Major Wandling has been serving The Salvation Army  for 22 years and says this is a great opportunity for people in need.

“Instead of falling off the radar or trying to do too much it’s good and we want them to come to u,” said Major Wandling.

According to the Major, these families range from people who were affected by the August floods in St. Joseph County and---

“With things like Honeywell, people are on strike, I don’t think they get paid when they’re on strike. A lot of people are living closer to pay check to paycheck,” added Major Wandling.

So many are asking questions they’ve never been faced with before.

“How do I keep up? How do I make Christmas happen? There’s where we step in,” asks Major Wandling.

Alisha Smith is a single mother of eight kids. This is her second year receiving help from The Salvation Army for Christmas.

And that’s the driving force of this Christian organization, helping those in the community when they need it most.

“It’s just a wonderful experience. I love I get to do it as my job and I know my volunteers love that they get to help out so much especially during this time,” added Rachael Parmelee- the Food Pantry Coordinator.

Distribution day is set for Tuesday December 20th. The Salvation Army is in need of 400 volunteers. If you want to help out here is the link.