Saturday's windstorm: not all that unusual

NOW: Saturday’s windstorm: not all that unusual 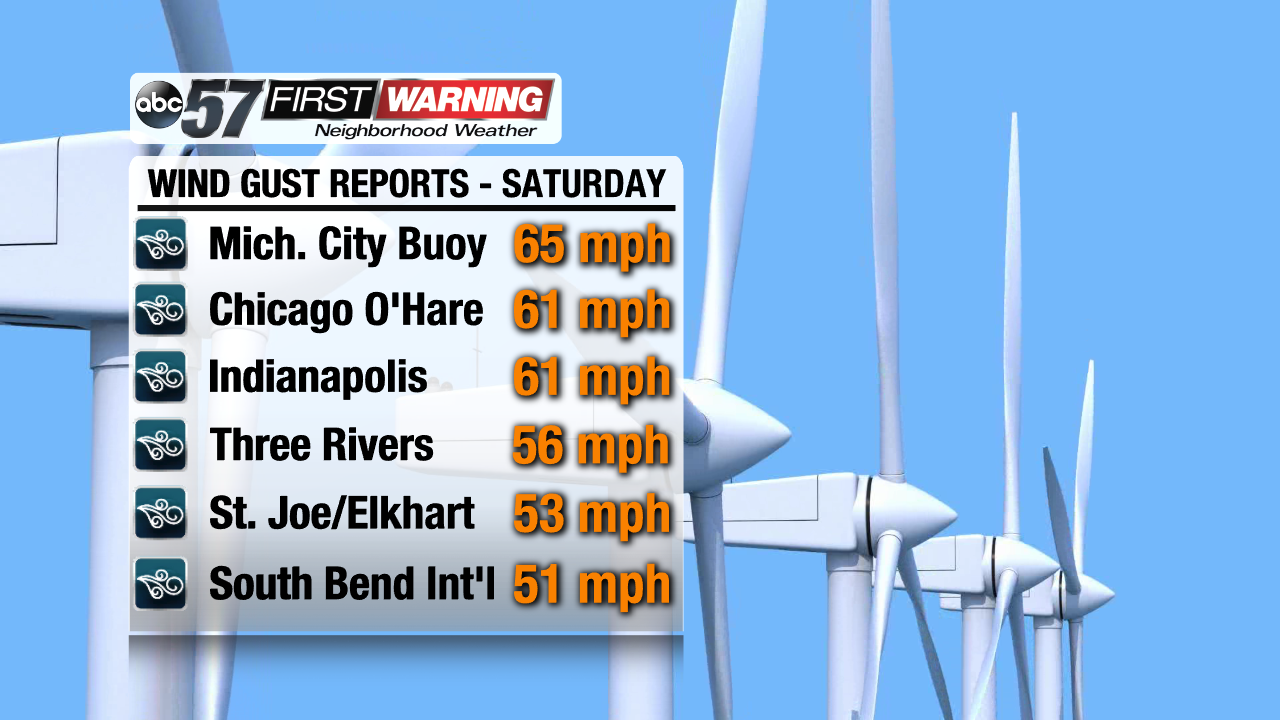 As you're probably aware, Saturday was a very windy day. Wind gusts across Michigan, Indiana, Illinois, and Ohio peaked at values between 45 and 65 MPH. The highest gust in Michiana occurred at the Michigan City Buoy, which clocked a gust of 65 MPH! That is the same as a weak EF0 tornado, or a strong tropical storm! Both Chicago and Indianapolis saw maximum wind gusts of 61 MPH. Until Saturday, Indianapolis had not recorded a wind gust that high since January of 2017. Chicago O'Hare had not seen a gust over 60 MPH since February of 2016! There's a trend there; strong wind gusts in the fall and winter. 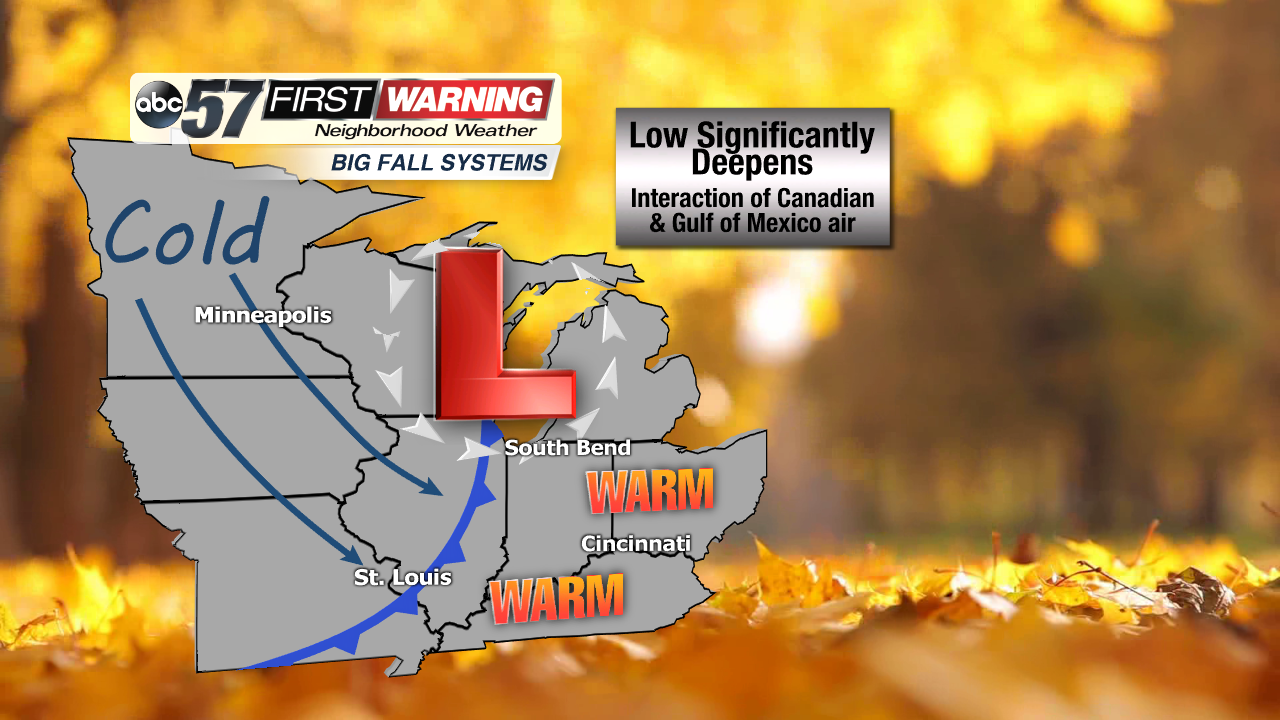 The strongest inland wind gusts in Michiana were recorded in Three Rivers (56 MPH), Elkhart (53 MPH), St. Joseph (53 MPH), and the South Bend Airport (51 MPH). Wind gusts of these magnitudes are not unheard of in this region during the fall and winter. This time of year brings an elevated risk of high wind events as cold Canadian air interacts with warm, humid air from the Gulf of Mexico. When the two opposing air masses collide, strong areas of low pressure can be generated. The result? Potentially strong to damaging winds in the Midwest, Great Lakes and Ohio Valley. 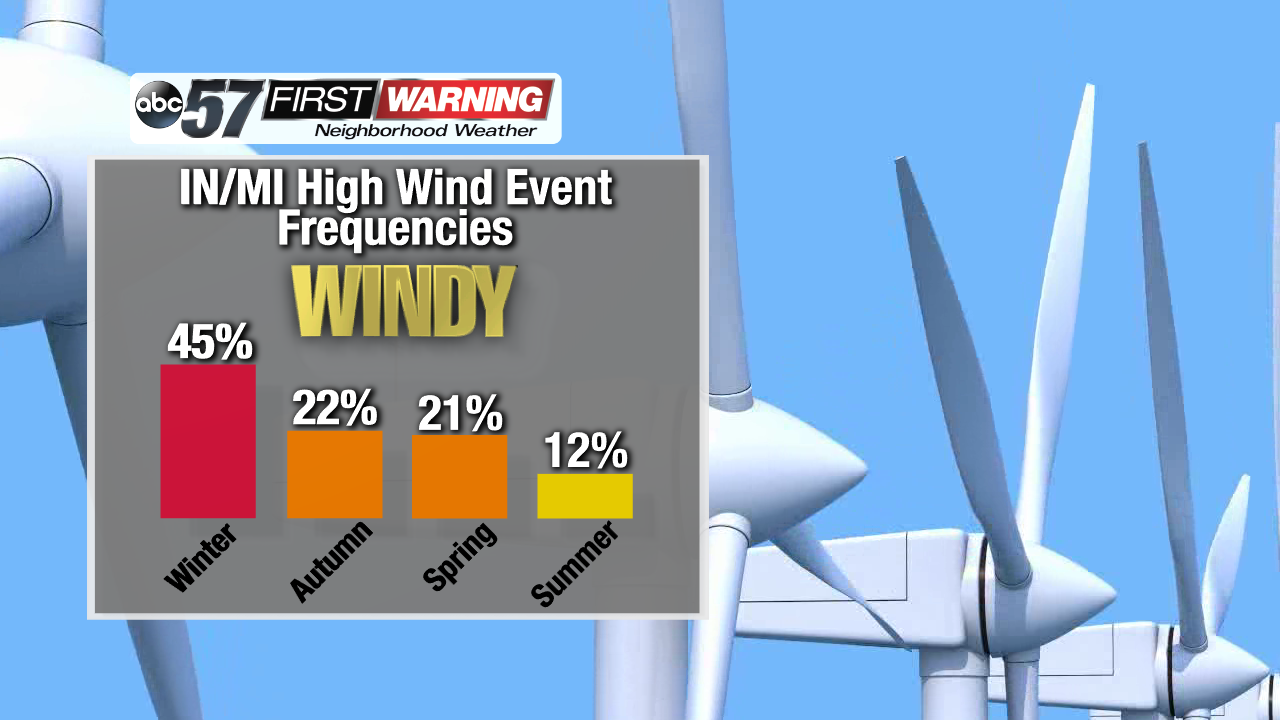 Technically, the months of January, February and March feature the highest average wind speed in Michiana. As such, winter is the season with the most high wind events for us. However, as mentioned above, conditions can become supportive of strong winds in October, November and December as well thanks to the pressure gradients that form between frigid air from Canada and warm air in the South. In addition, colder air is more dense. Denser air has a higher pressure. This further allows tight pressure gradients to develop across the Midwest, Great Lakes and Ohio Valley. And, tight pressure gradients equate to windier days in the fall and winter. 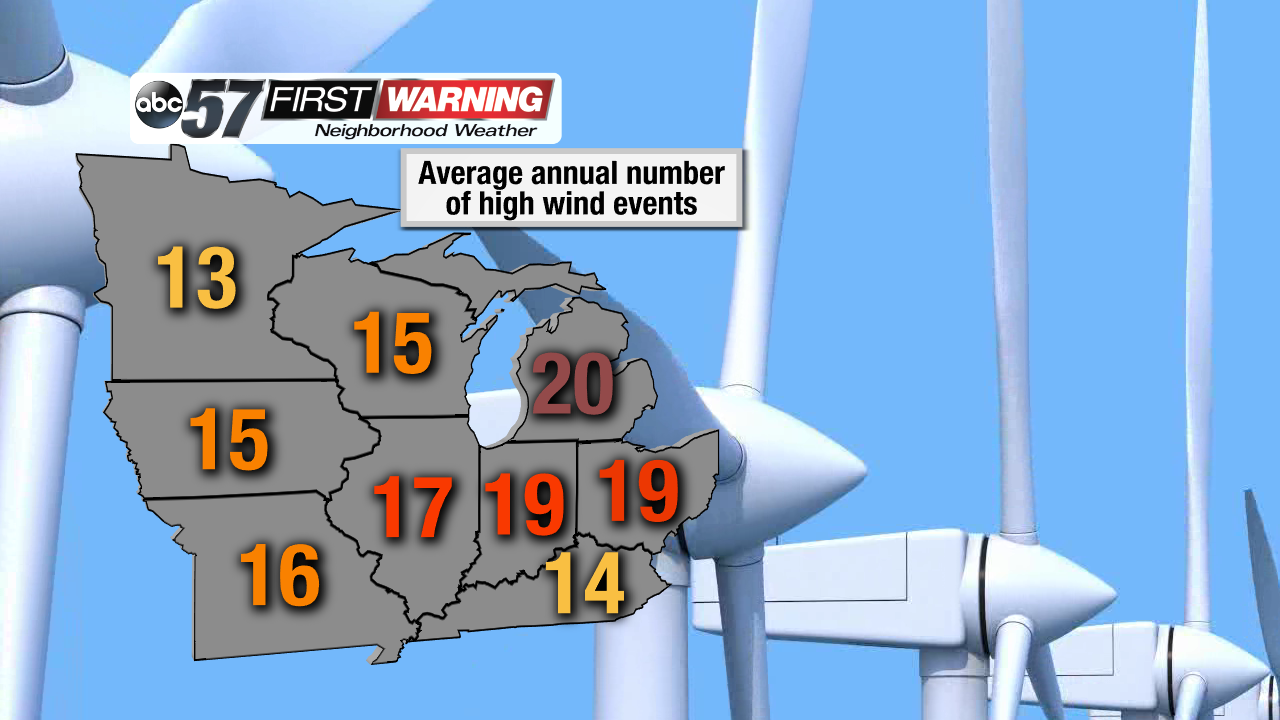 A study by the Illinois State Water Survey looked at the frequency of high wind events caused by thunderstorms, mountain storms and extratropical storms (in other words, low pressure systems). A few main points can be pulled from the study regarding the Great Lakes States. First, there's a "bullseye" of high wind events in Michigan, Indiana, Illinois, and Ohio. Each state averages at least 17 high wind events each year. Of course, some of these are caused by thunderstorms in the spring and summer. But many are events such as the one we saw Saturday.

The study takes things even further by analyzing high wind events that classify as catastrophes. Catastrophes are defined as a natural phenomenon that causes at least $1 million in damage. Once again, Michigan, Indiana, Illinois, and Ohio rank highly. Each of the four states saw at least 13 high wind catastrophe events between 1972 and 2006, putting each of them in the top-13 in the country. 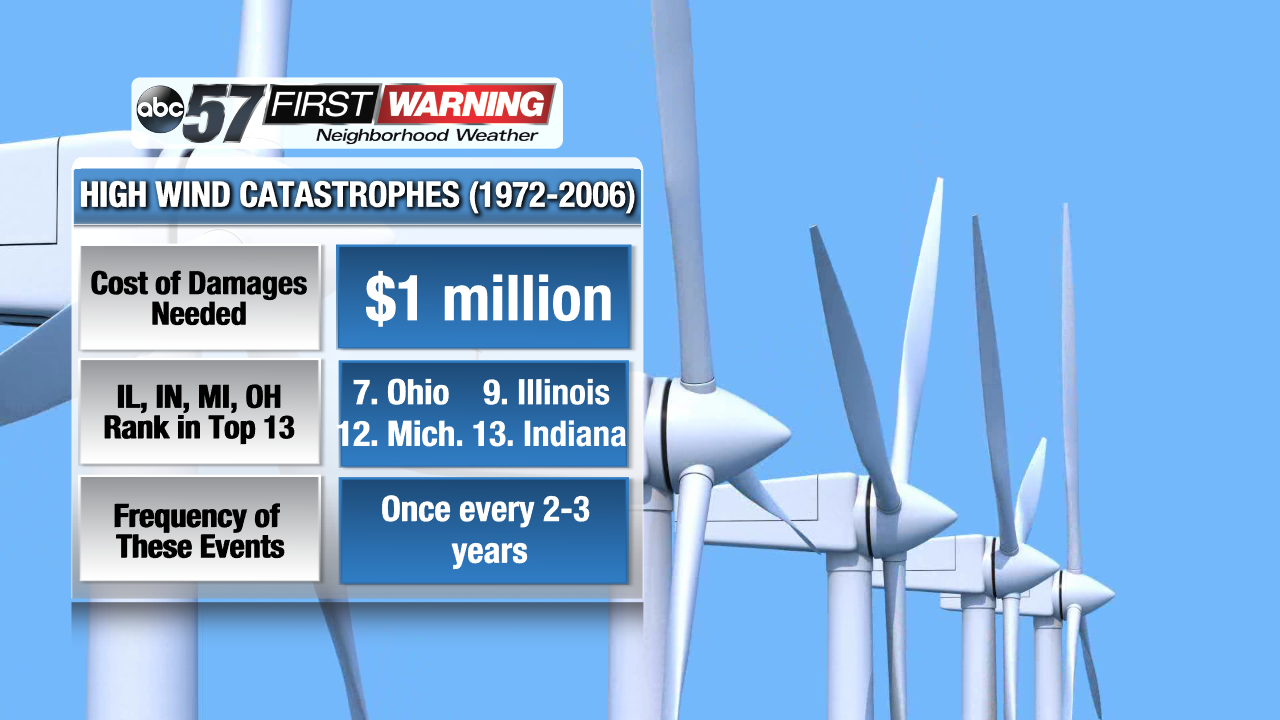 These catastrophic wind events occur once every 2-3 years, on average, here in Indiana and Michigan. As shown above, the less-severe high wind events occur much more often; roughly 20 times per year. It's important to remember that not all windstorms impact a state in its entirety like the one we saw on Saturday. In fact, many of the windstorms that occur in the Great Lakes are localized events that affect a handful of counties. Regardless of the size of any given high wind event, they are significantly more likely during the late fall and winter months. So, yes, Saturday's event was a little unusual in the sense that it happened early in the fall. It was not unusual, though, in the sense that this part of the United States sees plenty of high wind events from strong low pressure systems each year.
Share this article: