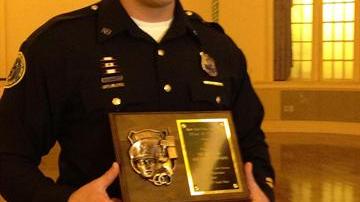 SOUTH BEND — The South Bend Police Department took some time out of their schedules Sunday to honor dozens of officers and civilians at an awards ceremony.

Police Chief Ron Teachman and the St. Joseph County prosecutor, among others, gathered at the Palais Royale.

Many different awards were handed out, including the 2012 Officer of the Year award. That honor went to patrolman Tony Dawson, who works with the department's K9 team.

"I'm honored and humbled that they selected me. I mean there are 200 other officers that they could've picked to be officer of the year," said Dawson. "It's awesome to be a police officer in general. You know I come from a family of them. You know my father is a retired police officer. My brother is and so is my wife so it's a family business for us."

This is the eleventh annual SBPD awards ceremony.