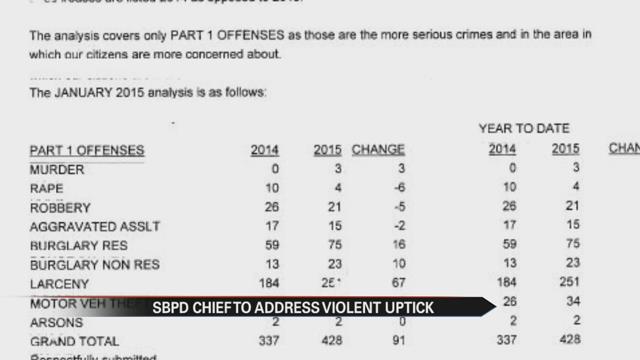 At the beginning of 2015, the South Bend Police Department released some comprehensive data that detailed what type of crimes are happening within the city.

The data showed that for January, February, and March, the majority of the crimes logged increased compared to the previous year.

In January, the murder count for the year was up by three compared to the year before when there was not a single murder in the month.

There were fewer murders in March; however by the end of March the overall number for 2015 was already higher than in 2014.

SBPD has not released numbers for the spring and summer months but residents can check crime in the city on their own by using this crime map.

Monday afternoon, Chief of Police Ron Teachman is expected to address the increase in violent crimes at the public safety meeting.

To view the crime reports posted by SBPD, click here.