School administrator accused of having affair with coworker 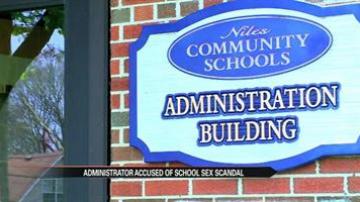 NILES, Mich. -- An administrator for Niles Community Schools has been suspended for allegedly having an extramarital affair with a coworker during work hours.

"It's not fair, it's not fair. That's her personal life," said Kassie Ruff.

"She made bad choices. She's going to have to live with that, but nobody should put her down because she's one of the most wonderful teachers I've met," said Ruff.

Scott used to teach at Oak Manor School before she was promoted to an administrative position as director of instruction.

The interim Superintendent asked the board on May 5 to proceed with tenure charges against Scott. They voted 5-0 in favor.

In a letter to the board, the superintendent laid out the accusations against Scott.

She allegedly admitted to engaging in an intimate relationship with a male coworker during work hours.

The superintendent told the board that other district employees were aware of the relationship, which has adversely impacted Scott's ability to perform her job.

Scott's husband is also a teacher in the district.

On February 12, Scott was told not to discuss the ongoing investigation with any other district employees, but allegedly communicated with the male coworker. He allegedly admitted he and Scott "sought to delete texts, photos and videos which would have implicated them."

In addition, in Scott's contract it states she can be terminated for engaging in acts of moral turpitude or insubordination. The superintendent alleges she was insubordinate by ignoring an order not to communicate with the male coworker.

Scott was suspended with pay.

"I have 3 kids that go to Niles. Caleb was bullied quite badly last year. She was the one that stuck up for him tremendously well -- so we know her pretty well," said Ruff.

Ruff says the accusations don't reflect the Scott that she knew.

"Wonderful. She's just a wonderful person. I wish all teachers could be like her-- very student dedicated," said Ruff.

Ms. Scott disagrees with the decision of Niles Community Schools to disclose information in the charges that relate to her personal life. Ms. Scott has denied under oath that any of the allegations occurred on school property or during school time.

If the Teacher Tenure Commission finds Scott guilty, she'll be discharged from the district.