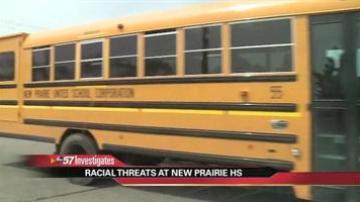 NEW PRAIRIE, Ind. -- New Prairie school officials are trying to find the student or students responsible for threats made against an African American high school student.

The superintendent said they are taking this investigation very seriously.

But the student’s guardian said the threats have been going on for months—and she wants something done now.

It all started with a small note, carrying a very big message. The note read, 'All [expletive deleted] must hang."

It was placed inside the locker of an African American student at New Prairie High school.

That student’s aunt said he’s been dealing with this kind of hatred for months, to the point where he now dreads going to school each day.

“He’s a mess right now. He comes home. He goes and lays in his bed. He doesn’t want to go back to the school anymore,” said Lori Marsh.

New Prairie School’s Superintendent Jim Dermody said he was shocked when his staff told him what had happened.

“It’s a level of disgust that the student would receive something like that because we pride ourselves on being a safe school," said Dermody.

But the threats continued. Another came in the form of a voicemail that was left on his aunt’s cell phone.

“We were horrified. We feel like they invaded our home at that point. They took it a step too far,” Marsh said.

The superintendent said the school is investigating.

He said the school had several programs already in place before these incidents to promote diversity and tolerance.

He also added that these racial threats made by one or more students do not represent the values of the majority of students at New Prairie.

And when those responsible are found, they will be punished.

“Any individual that we could identify and prove that was involved in this activity would face very serious consequences,” Dermody said.

But Marsh is skeptical much is being done. Her nephew received that note more than one month ago. And she said he has also given faculty names of those he believes are involved.

Marsh more than anything wants him to feel safe again.

“We send them to school to be protected and at this point I don’t feel like they’re being protected,” she said.

Marsh said she has filed a police report and is now considering transferring her nephew to another high school.