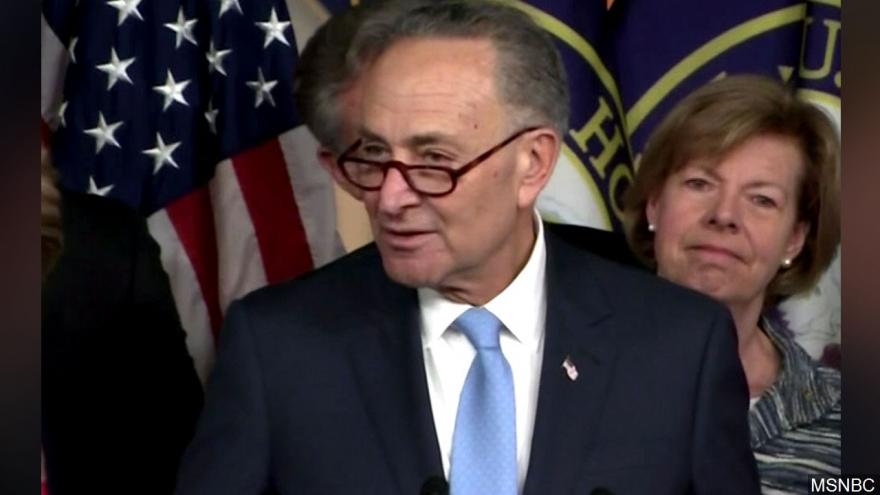 (CNN) -- Senate Minority Leader Chuck Schumer is demanding the Federal Aviation Administration increase inspections of aircraft maintenance after his office reviewed agency records and found that enforcement and fines specifically for maintenance issues have dropped over the last several years.

Schumer's office asserts that formal enforcement actions for airline maintenance issues decreased after 2014 and dropped dramatically in 2017. The data was compiled from the agency's quarterly reports on civil enforcement penalties, according to a statement from his office.

The New York Democrat said the decline in maintenance enforcement raises serious concerns about whether the FAA is meeting its oversight mandates. He demanded the agency examine the data and report back on why that enforcement has decreased.

"After each incident, the FAA says they're going to study that particular incident," Schumer said during a Sunday night news conference. "We want them to be proactive and not look at safety after a tragedy occurs. We don't want them to look at a particular instance of safety, maintenance, but at all of them."

In response to Schumer's release, the FAA said: "We are never content with the status quo, and the FAA is continually working to enhance safety for the flying public. The FAA's comprehensive oversight system is designed to identify potential risks before they become serious problems and ensure that corrective action is taken. The process is dynamic and requires that the FAA, and the airlines we oversee, constantly strive for safety improvements."

The Southwest Airlines incident occurred on a flight from New York to Dallas about 20 minutes after takeoff, when the jet's engine failed and shrapnel shattered a passenger window, fatally injuring 43-year-old Jennifer Riordan, a mother of two. The FAA on Friday ordered new inspection requirements for engines similar to the one that failed.

The "60 Minutes" report on Allegiant Air, meanwhile, detailed more than 100 of what it described as serious mechanical incidents between the start of 2016 and October 2017, including midair engine failures, smoke and fumes in the cabin, rapid descents, flight control malfunctions, hydraulic leaks and aborted takeoffs. While Allegiant has not had a fatal crash since it began passenger flights in 1999, it reported at least 60 unscheduled landings and 46 in-flight emergencies over the past two years, the news program said. The number of serious safety problems on that airline were about 3½ times greater than the nation's other major airlines, according to the report.

Meanwhile, the helicopter crash in the East River last month that killed all five passengers prompted Schumer to call on the FAA to suspend the operating certificate of the company, Liberty Helicopters, until its safety record and the crash are fully assessed.