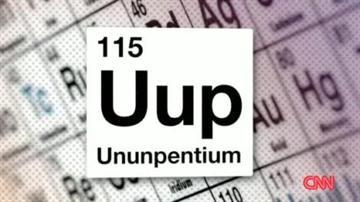 Move over gold and lead, there's a new, heavier element waiting for a space on the periodic table. The new element is officially known as 115.

Researchers in Sweden say they've made a new element by slamming together the atoms of calcium and americium.

And it's a beast.

Its atomic number is 115, much heavier than lead or uranium.

Its temporary name is ununpentium, much harder to say than lead or uranium.

But you can't see the new element.

Right after the atoms collided, the element disappeared in a flash of radiation.

You can't find it because it doesn't exist in nature.

Swedish scientists can't say they invented it because Russian researchers first "made" this element in 2004.

And you can't really do anything with it; they say it's just not practical.

Some folks might be confused about why we should care at all.

Well, researchers say it did confirm that the 2004 study created a new element-- even for just a moment.

Scientists hope that one day, experiments like these could lead to the lasting creation of a new, usable element.