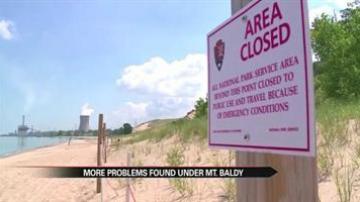 MICHIGAN CITY, Ind. -- It has been nearly seven months since 7-year-old Nathan Woessner fell into a hole at Mount Baldy at the Indiana Dunes. Scientists are reviewing an EPA report to determine how to move forward.

Bruce Rowe, spokesman for the Indiana Dunes National Lakeshore, says Mount Baldy will likely be closed for a while.

"What we've learned the more we've studied this is that we really don't know what's going on and nobody out there in the scientific world seems to know either," said Rowe.

The EPA has been studying the dune ever since the incident that nearly killed Nathan last summer.

The EPA report shows 66 additional anomalies - areas under the surface that are empty or contain something other than sand.

Scientists with the National Park Service are trying figure out what to do next.

"By the end of this month, they're going to get back to us with any sort of conclusions that they can draw - if any. And also, next steps; such as possible more research - maybe some sort of other equipment that can be used," said Rowe.

For now, Mount Baldy remains closed. It could impact tourism. It's the tallest sand hill in the park. Millions of people from across the country visit every year.

Because this has never happened before, park rangers say they're unsure of what it would take to fix it.