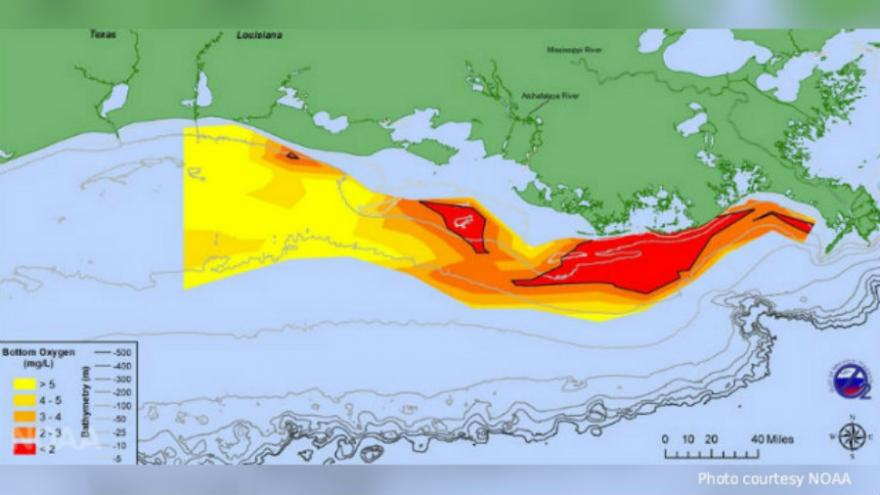 Dead zones are areas in which water at and above the sea floor holds too little oxygen to support marine life. This dead zone is the fourth-smallest ever measured in Louisiana, and is only about 40 percent the average size predicted earlier this year based on nitrogen and other nutrients flowing down the Mississippi river.

"Although the area is small this year, we should not think that the low-oxygen problem in the Gulf of Mexico is solved. We are not close to the goal size for this hypoxic area," said lead scientist Nancy Rabalais of Louisiana State University and the Louisiana Universities Marine Consortium.

The dead zone covers about 2,720 square miles (7,040 square kilometers), rising in some areas as much as three-quarters of the way to the surface, she said. The sea-floor area is about 50 percent larger than the goal set by the Mississippi River Nutrient/Hypoxia Task Force, she said.

Each year's oxygen depletion begins as snowmelt, and followed by spring rains pouring from the Mississippi River into the gulf. The newly deposited fresh water is lighter than salt water, causing two layers to develop. Nitrogen and other nutrients in the fresh water feed a growth spurt of algae and microorganisms at the top. The microorganisms die and fall to the bottom, where their decay consumes oxygen from the bottom up.

She said the Gulf of Mexico's hypoxic zone is the world's second-largest human-caused dead zone, behind only the Baltic Sea.

The dead zone often stretches into Texas waters and occasionally reaches east of the Mississippi — though eastward excursions have become more frequent in recent years, her report noted.

The National Oceanic and Atmospheric Administration had predicted that this year's dead zone would cover about 5,780 square miles (15,000 square kilometers), or about the size of Connecticut.

The NOAA combined four models to make that prediction. The only model that includes winds , made by scientists at North Carolina State University, was at the low end of the group, noted Don Scavia, a professor emeritus at the University of Michigan who works on another model.

"It appears that the westerly winds that distribute the nutrients from the Mississippi to the west were abnormally low around the time of the measurement cruise. That would have kept a lot of the settling algae to the east," he said in an email.

He also noted that the dead zone reached higher than usual, "indicating that the overall volume of water with very low oxygen might have been similar to the predicted areas with a more typical thickness."