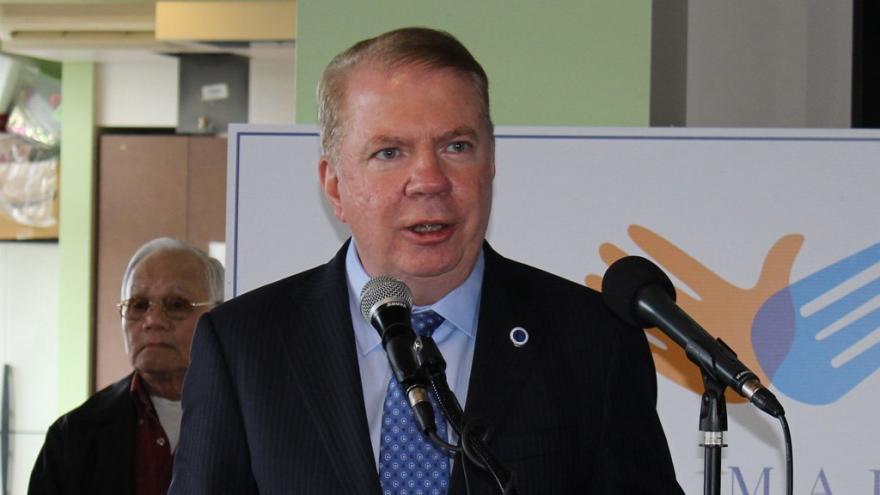 Murray, a Democrat and the city's first openly gay mayor, said he was resigning effective 5 p.m. Wednesday so the scandal would no longer overshadow his office.

The mayor's announcement comes after his cousin gave an interview with the Seattle Times alleging abuse, the latest in a series of similar accusations. The cousin is the fifth person to publicly accuse Murray of child sexual abuse since a lawsuit was filed against him in April.

Murray denied the allegations, as he has in the past. Previously, he called them part of a political effort to stymy his progressive agenda and support for LGBTQ and immigrant rights.

"While the allegations against me are not true, it is important that my personal issues do not affect the ability of our city government to conduct the public's business," he said in a statement.

"To the people of this special city and to my dedicated staff, I am sorry for this painful situation."

Council President Bruce Harrell will become mayor upon Murray's resignation. Harrell has five days to decide to hold the position for the remainder of Murray's term, which ends in December.

Murray, 62, was elected in 2014 after 18 years as a state lawmaker. In his statement Tuesday, he touted his accomplishments from his political career. As an openly gay state legislator, he sponsored Washington state's historic marriage equality law and a landmark bill banning discrimination based on sexual orientation.

As mayor, he raised the minimum wage to $15 an hour, passed ambitious affordable housing legislation, and laid the groundwork for a city-owned sports and entertainment arena. He was a party to a lawsuit filed in March on behalf of the city against the Trump administration over its executive order on so-called sanctuary cities.

But, in light of the latest allegations, he said it was clear it is best for the city for him to step aside.

He withdrew from the Seattle mayor's race in May, after a lawsuit accused him of repeatedly raping a man about 30 years ago. Murray denied the allegations, saying he never heard his accuser's name before the lawsuit. But he said he was dropping his re-election bid so the scandal would not overtake the election.

Delvonn Heckard said he was 15 and Murray was 32 when the sexual acts occurred, claiming that Murray paid him for them.

The complaint further alleged that Heckard was not the only child abused by the mayor. On at least one occasion, Heckard said he was at Murray's apartment when another boy who appeared underage was there. "D.H. was of the understanding that Mr. Murray was having sex with the other boy for money at the same time," the complaint alleged. A spokesman for the mayor said the allegations were unfounded.

Heckard withdrew the lawsuit in June to complete counseling, according to his lawyer. In a news conference following the withdrawal, Murray said the lawsuit was politically motivated. He vowed to continue his "progressive agenda."

Since the lawsuit, four more men have publicly accused Murray of various forms of sexual abuse when they were teens. CNN has not independently verified the claims.