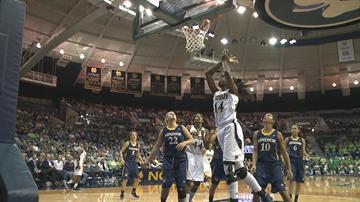 This is the first game the Irish have played since last season’s run to the Final Four and playing in the NCAA national championship game.

The Irish forced the reigning Canadian national champions to make 36 turnovers on Wednesday night.
7,735 fans turned out at Purcell Pavilion to watch the Irish in action, which was a program record for an exhibition game.
Fans said they feel the momentum from last season rolling over to the 2011-2012 season. This year just might be the Irish’s lucky season.
“I think they're going to go all the way this year. This is the year,” said Notre Dame Fan Brad Milliken.
The Irish play next at home on Friday, November 11th against Akron which is desgninated “Proud to be an American” night in honor of Veterans Day.
Share this article: