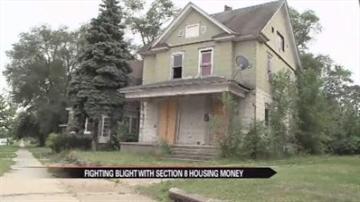 SOUTH BEND, Ind. -- A Michiana realtor is looking to help the city of South Bend fight urban blight by using a Section 8 program that helps residents own homes instead of renting them. It's a concept used in other parts of Indiana, but in South Bend it has only been used a few times.

"One of my passions is to see the quality of life and the level of homeownership increase in the areas hardest hit by vacant and foreclosed properties," said Broker Associate Steve Weldy.

Recently he came across a public program he feels is being under-utilized.

It allows people using Section 8 money to make payments towards owning a home - rather than renting it.

For those who qualify, it could be cheaper too.

"It just astounded me that there are people paying at least $500 a month rent for a home that this person's going to be able to buy for down near a couple of hundred dollars a month," said Weldy.

Weldy says when people become homeowners; they have more pride not only in the condition of their own home but in the rest of the neighborhood as well.

He thinks this program could be a missing piece in solving the area's vacant home problem.

"I think the money will go further and the people will be better off," said Weldy.

Over the last decade, only two people have used these homeownership vouchers in South Bend.

In Goshen, a city a third of South Bend's size, vouchers have been used 14 times.

"It obviously works for some people, and it just hasn't been noticed lately, and I'm hoping that it is," said Weldy.

It has been two years since the last vouchers were approved in South Bend.