Security robot meets untimely demise after drowning on the job 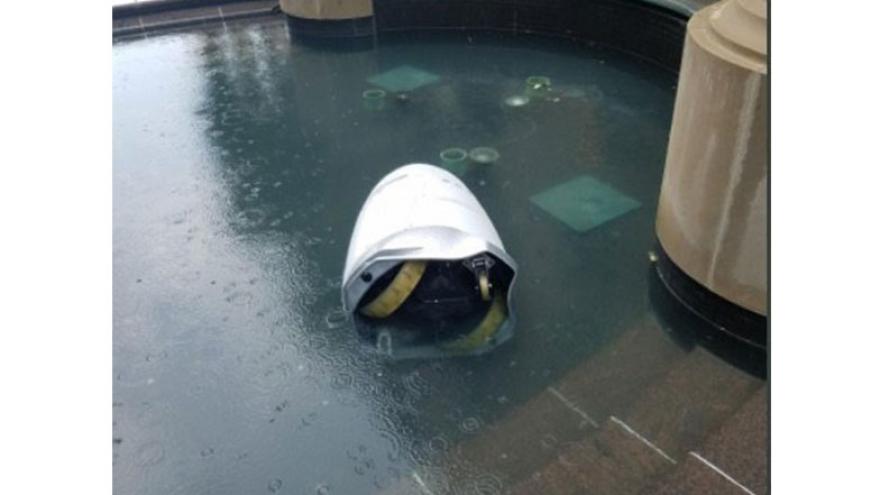 (CNN) -- It was one small step for security technology, but one giant leap in the wrong direction for robotkind.

Photos show the sad, waterlogged robot cop partially submerged in defeat. It's unclear if any foul play was involved or if Steve simply rolled down a dark path on his own.

The post touts Steve's "extensive catalogue of security capabilities," which apparently does not include any underwater crime-fighting.

Steve was still getting used to the streets he was programmed to protect. He was "mapping out the grounds" to theoretically prevent this kind of accident.

"This initial phase is our opportunity to implement, vet, and remediate any bugs in the system to help advance both the programming and security features in a busy mixed-use center such as The Washington Harbour," an MRP spokesperson wrote in a statement to CNN. "These incidents show us where improvements are needed, which may then be deployed to contribute to the ongoing security of our tenants, residents, and visitors."

Even though Steve had only been rolling around for a few days, he already made some new friends. "He looked so happy and healthy," one mourner remembered on Twitter.

But others who work near Steve weren't too sad to see him go. One not-so-fondly reflected on Steve being "very creepy."

And for some, Steve's unfortunate swim was a victory for humans fighting against the robot uprising.

A company called Knightscope produces Autonomous Data Machines like Steve. According to the company's website, the ADMs use multiple sensors to detect their location and "carefully navigate" the right path. And while Steve was "ruggedized and protected against vandalism," it's unclear if those same protections would save the robot from any water damage.

And this isn't the first time a security robot has run into trouble. In April, a drunken man in California tipped over a 300-pound Knightscope ADM. Last summer, another one in California knocked over a toddler.

Knightscope has not responded to requests for comment, and there's no word yet if Steve survived his unprecedented dip in the fountain. Luckily, no one was injured -- except for Steve.