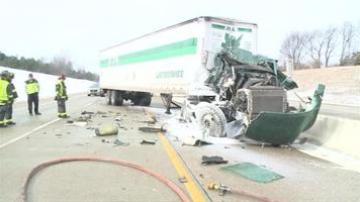 ELKHART, Ind. -- Two semis collided on US20 around 11 a.m. and caused a huge traffic backup while HAZMAT crews cleaned up liquids spilled in the accident.

The accident happened at 11 a.m. and crews were still cleaning up at 5 p.m.

"We have about 275 gallons of wood stain about 100 gallons of diesel fuel spilled and running down the side of the bypass," said Brian Kazmierzak, Penn Township Fire Department.

The accident happened when one semi bumped into the rear end of another in the eastbound lanes of US20.

"The first semi hit the wall as well and when it hit the wall it jackknifed the trailer to split open," said Kazmierzak.

The driver was trapped inside his cab for 15 minutes before crews were able to pull him out.

He suffered minor injuries and was taken to memorial hospital.

"The driver of the second semi was initially trapped however we extricated him with relatively minor injuries," said Kazmierzak.

HAZMAT arrived on the scene shortly after to clear the bypass of any hazardous materials.