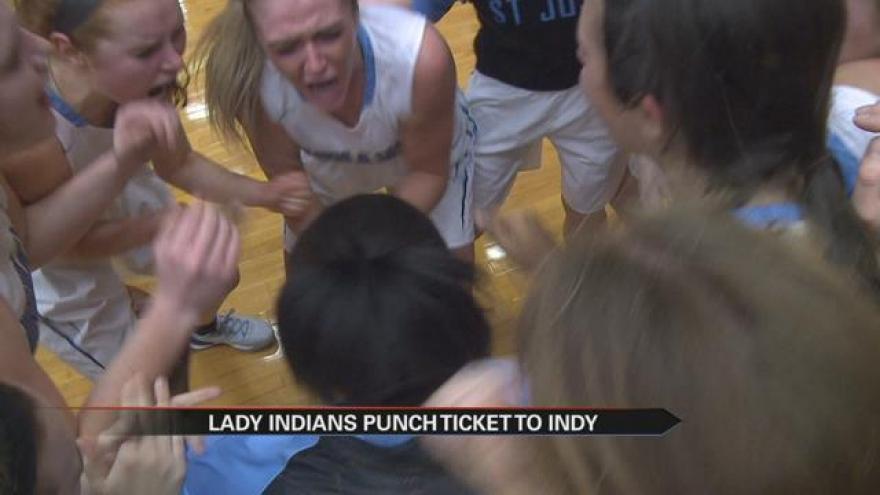 Nicole Konieczny knocked down 2 free throws with less than 15 seconds to go and St. Joe held on in the final seconds to beat Heritage Christian 57-54 in a thriller for the 3A girls basketball Semi-State Saturday afternoon at Crown Point High School.

St. Joe is now off to the state championship game next Saturday for the first time since they were crowned state champs back in 2005. The star players of that team: Sydney Smallbone, Melissa Lechlitner and Kristen Dockery just happen to be part of the coaching staff this season.

"Nicole and Daly were huge, they've been huge all season, senior leadership really shined through for us. I'm very proud of those two but I'm very proud of our entire team; everybody from the bench to the coaches what we brought, we're together as one and that pays off when you're a solid team," Smallbone said.

"Oh my gosh, it's a dream come true. I've dreamed of this since I was a little girl so it was incredible and there's nobody else I'd rather be with than my team so I'm really proud of them all." Konieczny said.

In other action, Northridge Lady Raiders fell to Homestead 63-40 in 4A action and Marquette Catholic fell in double overtime to Union City.

St. Joe advances to the State Finals where they will take on North Harrison at Bankers Life Fieldhouse next Saturday at 6 ET.