Senate votes to reopen the government, sending budget deal to the House 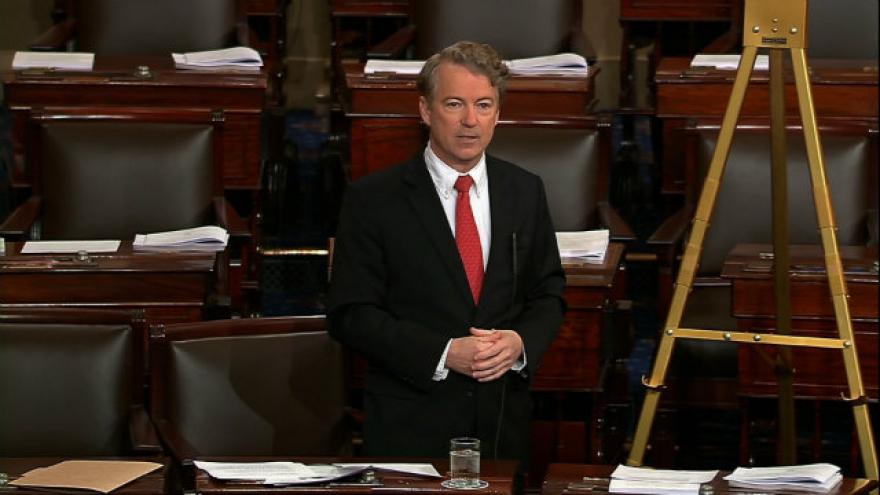 Kentucky Sen. Rand Paul is speaking on the Senate floor, holding up a two-year budget deal with the hours ticking away toward a midnight deadline before the government starts shutting down. Photo courtesy Senate TV

(CNN) -- The House of Representatives approved a major budget deal early Friday morning, ending a brief government shutdown overnight and sending the measure to the President for his signature.

The House vote was 240-186. The GOP-controlled chamber needed help from House Democrats to clear the bill.

The Senate approved the measure earlier on Friday morning. The federal government shuttered for the second time in less than a month overnight, after Kentucky Republican Sen. Rand Paul prevented the deal from passing Thursday ahead of a shutdown deadline.

Congressional negotiators scrambled all day Thursday and early Friday morning to lock in enough votes in the House.

The impacts of this shutdown, which came just weeks after Democrats and a handful of Republicans including Paul refused to support the last continuing resolution but only lasted a weekend, were expected to be minimal -- but a path forward for the bill still remained murky in the House.

It's not clear if there are enough votes in the House to do so, as liberals are unhappy about the bill not addressing immigration and conservatives oppose the increased spending.

After the vote succeeded, Senate Majority Leader Mitch McConnell kept his word to move to open an immigration debate next week. The majority leader moved to call a vote Monday to proceed to an unrelated House bill that will serve as a vehicle for a process unlike the Senate has seen in recent memory, where senators will be able to offer a number of amendments that are competing immigration proposals to see which ones will secure the 60 votes needed to advance. But that will only happen if the House passes the continuing resolution later Friday morning.

Key question: How many House Democrats will vote for the plan?

As of late Thursday, it was not clear whether there would be enough Republican votes to pass the bill in the House, meaning most likely some Democrats would have to vote for it to reach a simple majority, a fact House Speaker Paul Ryan alluded to in a Thursday morning radio interview with Hugh Hewitt.

"Part of it depends on the Democrats. This is a bipartisan bill. It's going to need bipartisan support," the Wisconsin Republican said. "We are going to deliver our share of support. I feel very good about Republicans."

The colossal bill, which lawmakers have been negotiating for months, would be a game-changing piece of legislation, clearing the decks for Congress in dealing with major spending issues as well as doling out disaster relief money.

The overall deal also does not address the high-profile issue of immigration, a key sticking point for many Democrats; but it does increase spending caps by $300 billion for the Pentagon and domestic priorities, a crucial incentive for getting enough votes from both parties.

Some House Democrats, including Minority Leader Nancy Pelosi, plan to vote no on the bill because it doesn't include a permanent solution for the Deferred Action for Childhood Arrivals immigration program. Democrats are pushing for Ryan to make a clear commitment that he will bring immigration legislation to the floor -- and let a simple majority dictate what passes, even if it's not a majority of Republicans voting for it.

Ryan, meanwhile, insists he's made a commitment, though he says he intends to bring a DACA solution, "one that the President will sign."

"I know that there is a real commitment to solving the DACA challenge in both political parties. That's a commitment that I share," Ryan said during a news conference Thursday on Capitol Hill. "To anyone who doubts my intention to solve this problem and bring up a DACA and immigration reform bill: do not."

But the House speaker argued that Congress must first pass the budget agreement to shift their focus to immigration reform as a separate legislative fight.

Pelosi for her part is not whipping her fellow Democrats in the House to vote against the bill, saying at her own news conference earlier, "I am just telling people why I am voting the way I am voting."

Many Democrats are outraged that the spending deal would give away leverage on immigration issues, as it's not clear if a DACA solution would advance without firmer commitments from GOP leaders.

"Anyone who votes for the Senate budget deal is colluding with this President and this Administration to deport Dreamers," said Rep. Luis Gutiérrez, an Illinois Democrat and fierce advocate for DACA recipients, in a statement. "It is as simple as that."

Democrats streamed out of a late evening conference meeting declaring their opposition to the bill and demand for a promise from Ryan.

"There's a lot of no votes in there," said California Rep. Pete Aguilar after the meeting. "Republicans are going to have to put up a big number and I don't think they have it."

Rep. Steny Hoyer, the No. 2 House Democrat, told reporters Thursday afternoon after a meeting with the Democratic caucus that he wasn't sharing his whip numbers yet.

"I think the majority of the caucus feels very strongly that what we're asking for is a very straightforward simple thing, simply saying an issue of great importance that the President has asked us to consider and pass, we want assurance that it will in fact be considered in a fair manner on the House floor," Hoyer said.

However some House Democrats have signaled they will support the bill, including Rep. John Yarmuth of Kentucky and Rep. Bill Pascrell of New Jersey. Most who came of the meeting either declined to comment or said they weren't voting for it.

Paul took to the Senate floor many times Thursday refusing to agree to move up the time for a vote in the chamber on the bill, which requires unanimous consent from all 100 senators. In doing so, Paul forced the vote procedurally to occur after 1 a.m. ET on Friday, after government funding expired.

Paul slammed his colleagues for "hypocrisy" and lack of fiscal restraint, as well as a lack of a fair and open process.

"There is probably a lot of blame to go around for the Republicans who are advocating for this debt," Paul said to CNN's Erin Burnett OutFront. "But I would say, really, primarily, this is coming from Congress. Leadership in Congress in both the House and Senate has decided to move forward. But the funny thing is you know so often in the media we hear 'we want you to work together.' They are are working together but working together to spend a ton of money."

Republican leaders say Paul wanted a vote on an amendment that is critical of the overall agreement but leaders couldn't give him that vote even if they wanted to, because it requires consent from all senators.

The proposal also represents a sharp change in tone for Republicans who under President Barack Obama railed strongly for fiscal austerity and warned about a ballooning national debt, and are now in effect removing barriers to spending previously put in place in part by leaders from their own party.

The Senate's Majority whip sounded a bit frustrated by the holdup. Sen. John Cornyn, a Texas Republican, said he didn't know how long it would take to resolve the issue and said there are other procedural steps Paul could take to get a vote that leaders were talking to him about.

"Sen. Paul has some concerns he wants to be able to voice," Cornyn told reporters. "We're trying to work with him to help get that done."

Cornyn pointed out, "It takes unanimous consent to get an amendment."

"If we get one amendment up, you can imagine other people are going to have amendments," he said. "You can essentially accomplish the same thing by a point-of-order and get a vote. He doesn't need consent to do that. So that's an alternative we're going to suggest to him and work with him on."

"It appears 'General' @RandPaul is at it again. He just called for the immediate withdrawal of all forces from Afghanistan as a way to give the US military a pay raise," Graham tweeted. "Fortunately, only 'General' Paul -- and the Taliban - think that's a good idea."

The massive two-year budget deal proposed by Senate leaders Wednesday would raise budget caps by $300 billion in the next two years, increases the debt ceiling and offer up more than $80 billion in disaster relief for hurricane-ravaged Texas, Florida and Puerto Rico.

About $160 billion would go to the Pentagon and about $128 billion to non-defense programs.

"Our members who are focused on the military are very happy where we landed with that," Ryan told Hewitt on his radio show in reference to the defense spending caps.

The debt ceiling will be raised by the appropriate amount until March 2019.

Exact spending would be left to the appropriations committees, but included in the funding is $10 billion to invest in infrastructure, $2.9 billion for child care and $3 billion to combat opioid and substance abuse.

The bill also keeps the government running until late March. Funding for the federal government is set to run out Thursday night at midnight, though congressional leaders in both parties have said they don't expect a shutdown and that the deal will pass.

"I think we will," Ryan said on Hewitt's radio show earlier Thursday. "I feel good."

This story has been updated and will continue to be updated with additional developments.