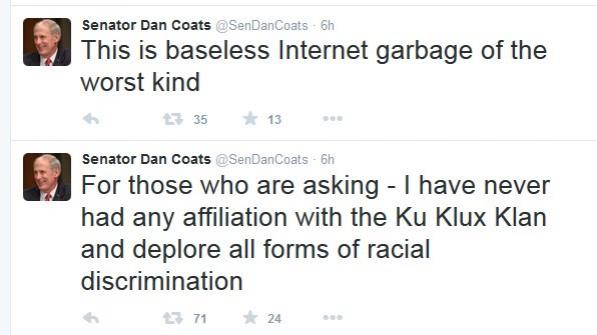 Two Indiana officials are accused of being affiliated with the Ku Klux Klan after a "leak" from Amped Attacks.

US Senator Dan Coats and Fort Wayne Mayor Tom Henry were named in a document posted to Pastebin.

After the group posted the names online, Senator Coats fired back on Twitter saying it was untrue.

"For those who are asking, I have never had any affiliation with the Ku Klux Klan and deplore all forms of racial discrimination."

Coats also wrote, "This is baseless internet garbage of the worst kind."

Mayor Henry also denied the allegations on his Twitter page.

"Claims that I have ties to the KKK are totally false and irresponsible. I am proud to be the Mayor of the city of Fort Wayne."

Henry added, "Our city celebrates and appreciates diversity and acceptance. Racism has no place in our society and my life."